Neutron moderators are a type of material in a nuclear reactor that work to slow down the fast neutrons (produced by splitting atoms in fissile compounds like uranium-235), to make them more effective in the fission chain reaction. This slowing or moderation of the neutrons allows them to be more easily absorbed by fissile nuclei, creating more fission events (see Figure 1). 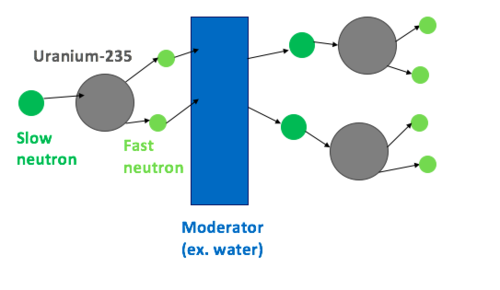 Figure 1. When a slow neutron collides with a fissile material like Uranium-235, it produces fast neutrons. The moderator will then slow these fast neutrons, and produce more slow neutrons to continue the nuclear chain reaction. When this process is repeated the fissile events are doubled each time. [2]

There are several different types of moderating materials, and each have places where they are used more effectively. Typically-used moderator materials include heavy water, light water, and graphite. The relative properties of these materials are compared below. The moderators vary in terms of their moderating abilities, as well as in their costs.

Light water (no different than regular water) is used in many reactors because it contains large amounts of hydrogen. Hydrogen works well as a neutron moderator because its mass is almost identical to that of a neutron. This means that one collision will significantly reduce the speed of the neutron because of the laws of conservation of energy and momentum.[1] In addition, light water is abundant and fairly inexpensive. One drawback is that hydrogen has a relatively high neutron absorption cross-section because of its ability to form deuterium. Thus light water can only be used as a moderator along with enriched fuels. Reactors that use light water are known as light water reactors and include the pressurized water reactor (PWR), the boiling water reactor (BWR), and the supercritical water cooled reactor (SCWR).

Heavy water is used in reactors because its benefits are similar to light water, but since it contains deuterium atoms, its neutron absorption cross section is much lower.[1] The main disadvantage to the use of heavy water is its high cost of production, as it is made using the Girder-Sulfide process. Reactors that use heavy water include the CANDU designs and the pressurized heavy water reactor.

Graphite has been a popular moderator in the past, however, one drawback is that it needs to be extremely pure to be effective. Graphite can be made artificially using boron electrodes, however, since boron is a very good neutron absorber— a small amount of contamination will make the graphite an ineffective moderator.[1] One benefit of graphite is that even at the high purity that is necessary for graphite to perform well, it is available at a fairly low price.[4] In addition, graphite is a good moderator as it is thermally stable and conducts heat well. However, at high temperatures the graphite can react with oxygen and carbon dioxide in the reactor and this decreases its effectiveness. Another potential issue with using graphite as a moderator is its ability to oxidize in the presence of air, and its low strength and density which could cause it to change dimensions in the reactor.[4]

Reactors that use graphite moderator include the RBMK, pebble bed reactors, and the magnox reactor.

Nuclear reactors can be either thermal or fast. Currently, almost all operating reactors are thermal and thus require a moderator to slow down fast neutrons to the thermal level so that nuclear fission can continue.[5] However, in fast reactors a moderator is not needed, and the neutrons within it move much more quickly. Fast reactors are beneficial as they enhance the sustainability of nuclear power. This is because they have the ability to get more neutrons out of their fuel, can transform nuclear waste into products that decay more quickly, and they respond better to potentially catastrophic equipment failures. However, they are more expensive, and they can overheat fairly easily.[5]