Climate scenarios are plausible representations of the future climate of the Earth, based on its current observed state and different greenhouse gas emission scenarios.[1] Climate scenarios are useful for investigating potential impacts of anthropogenic climate change. Climate scenarios typically use climate projections, by manipulating model outputs and then combining them with observed climate data. A scenario is any reasonable or probable description of a future state of the world. However, it is not a forecast. Each scenario is one alternative possibility of how the future can unfold. A projection serves as the raw material for a scenario, but scenarios require additional information.

Greenhouse gas (GHG) emissions are the product of complex systems, with exact future emissions nearly impossible to determine. Thus different scenarios are taken into account, each leading to different effects on the climate. The effects of different emission pathways are also subjected to compounding effects, which lead to faster changes on the climate system. This page discusses these effects; for more information on the exact scenarios, please see emission scenarios.

Representative Concentration Pathways (RCPs) are the approach taken towards emission scenarios by the IPCC in their 2014 climate change report. There are 4 pathways each with varying emissions of greenhouse gases up until the year 2100. The effects of these will be discussed here.

The 4 pathways are (shown below): 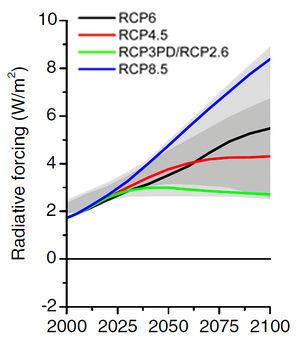 General results: Under all emission scenarios, the temperature of the Earth is projected to rise. The Arctic region will warm more rapidly than the global mean temperature, reported with very high confidence. Warming over land will also occur faster than over ocean, and will exceed the mean global temperature. It is also nearly certain that there will be an increasing frequency of warm days and nights.[3] It is also very likely that heat waves will increase in both frequency and intensity in many regions.

The global mean surface temperature is expected to change similarly for all 4 pathways up until the year 2035, and will likely be in the range of 0.3 - 0.7°C (relative to 2005), assuming no major disruptions in the natural carbon cycle such as a large volcanic eruption.[3] After 2035 however, the pathways begin to diverge up until the year 2100.

Extreme weather events are very likely to increase in both frequency and intensity as global surface temperatures increase. In all RCPs monsoons are likely to intensify, as well as El Niño related precipitation variability.[3] 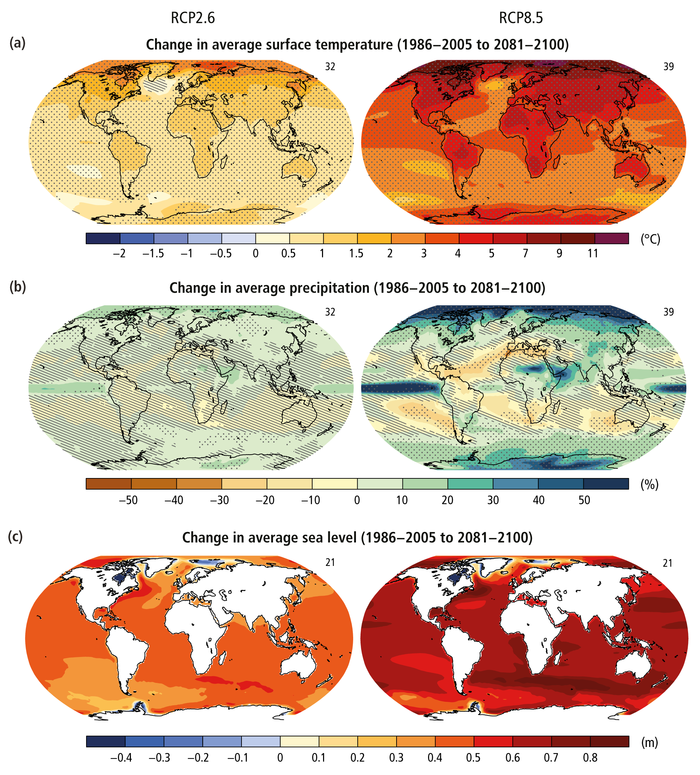 Figure 2. Coupled Model Intercomparison Project Phase 5 (CMIP5) multi-model mean projections (i.e., the average of the model projections available) for the 2081–2100 period under the RCP2.6 (left) and RCP8.5 (right) scenarios for (a) change in annual mean surface temperature and (b) change in annual mean precipitation, in percentages, and (c) change in average sea level. Changes are shown relative to the 1986–2005 period. The number of CMIP5 models used to calculate the multi-model mean is indicated in the upper right corner of each panel. Stippling (dots) on (a) and (b) indicates regions where the projected change is large compared to natural internal variability (i.e., greater than two standard deviations of internal variability in 20-year means) and where 90% of the models agree on the sign of change. Hatching (diagonal lines) on (a) and (b) shows regions where the projected change is less than one standard deviation of natural internal variability in 20-year means.[3]