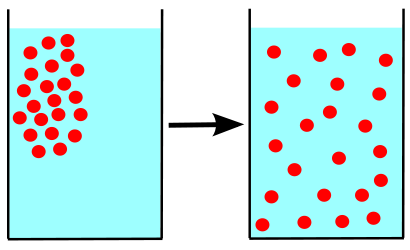 Figure 1. Diffusion of red molecules within a beaker. [1]

Diffusion is a form of mixing, usually where molecules disperse. More specifically, it is the net movement of molecules or atoms from a region of high concentration to a region of low concentration and is an effect directly related to the substances kinetic energy of random motion.[2] The kinetic energy of random motion is different for each substance and therefore the rate of diffusion for different substances varies. Over the diffusion process the mixture will become evenly distributed with a uniform concentration of substance throughout the containment vessel, as seen in figure 1.[2]

Diffusion is everywhere around us in our everyday life. Ever wonder why party balloons filled with helium slowly deflate after a couple days. It's because the helium diffuses through the balloon into the environment. Diffusion normally occurs in our day to day life when there is a barrier, or membrane, separating the high concentration from the low concentration. With regards to energy science, there are forms of Isotope separation which utilize diffusion. Gaseous diffusion is used for the enrichment of uranium in order for the uranium to be used in nuclear power plants. Osmosis, where there is a concentration gradient separated by a semipermeable membrane, is another good example of diffusion.

For more information on diffusion, please see hyperphysics. A good animated example can be found at this link: Diffusion

Diffusion is not to be confused with convection, which is another form of spreading/mixing. Many examples of mixing you can think of in everyday life are actually instances of convection. Substances can also be mixed through the combination of both these two methods and for this reason defining many instances of mixing can be a little complicated.

A good video by P. Morton shows this difference below:

The University of Colorado has graciously allowed us to use the following Phet simulation. Explore the simulation to see how particles moving around in a gas lead to various gas properties: