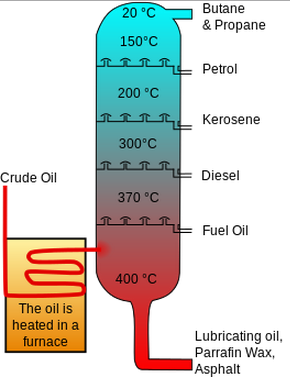 Fractional distillation is the process by which oil refineries separate crude oil into different, more useful hydrocarbon products based on their relative molecular weights in a distillation tower. This is the first step in the processing of crude oil, and it is considered to be the main separation process as it performs the initial rough separation of the different fuels.[2] The different components that are separated out during this process are known as fractions. Fractions that are separated out include gasoline, diesel, kerosene, and bitumen.[3] Fractional distillation allows a lot of useful products to be made from crude oil, with many environmental consequences for the use of those useful products!

The process of fractional distillation is fairly simple, but is powerful in the way that it separates all the different, complex components of crude oil. First, the crude oil is heated to vapourize it and is fed into the bottom of a distillation tower. The resulting vapour then rises through the vertical column. As the gases rise through the tower, the temperature decreases. As the temperature decreases, certain hydrocarbons begin to condense and run off at different levels. Each fraction that condenses off at a certain level contains hydrocarbon molecules with a similar number of carbon atoms.[4] These boiling point 'cuts' allow several hydrocarbons to be separated out in a single process.[5] It is this cooling with the height of the tower that allows for the separation.

After this rough refinement, individual fuels may undergo more refinement to remove any contaminants or undesirable substances, or to improve the quality of the fuel through cracking.

There are several ways of classifying the useful fractions that are distilled from crude oil. One general way is by dividing into three categories: light, middle, and heavy fractions. Heavier components condense at higher temperatures and are removed at the bottom of the column. The lighter fractions are able to rise higher in the column before they are cooled to their condensing temperature, allowing them to be removed at slightly higher levels.[3] In addition to this, the fractions have the following properties:[5]

However, there are two major components that are not accounted for in these three categories. At the very top of the tower are the gases that are too volatile to condense,such as propane and butane. At the bottom are the "residuals" that contain heavy tars too dense to rise up the tower, including bitumen and other waxes. To further distill these they undergo steam or vacuum distillation as they are very useful.[5]

Please see the video below from fuse school to see how fractional distillation works.