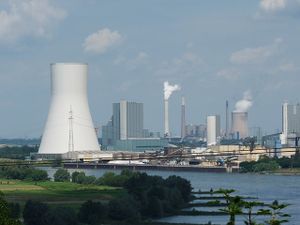 Figure 1: A power plant using a fuel to make electricity. Almost all power plants rely on some type of fuel (instead of a primary energy flow) as a source of energy.[1]

Fuels are dense repositories of energy that are consumed to provide energy services such as heating, transportation and electrical generation.[2] Even though most fuels ultimately get their energy from the sun (see energy conservation) they are usually considered to be a primary energy source. When people talk about energy conservation, usually they mean using less fuel (see fuel conservation).

When a fuel is used, it undergoes some process that leaves it in a form with less energy. This means that most fuels are non-renewable, but may be found extensively enough as to be considered sustainable. Primary flows, like wind, are not considered fuels and are a class of primary energy supply entirely different from fuels - for more information on this difference please visit the page: fuel vs flow.

Primary fuels include nuclear fuels, biofuels and fossil fuels. Often primary fuels are processed to make something chemically distinct from how they were harvested from a natural resource. For example crude oil is a primary fuel that undergoes fractional distillation to become products more useful to the consumer.

Gasoline, kerosene and diesel are also fuels, but are different as they are derived from primary energy sources. These are secondary fuels as opposed to primary fuels. These secondary fuels were processed from the form found as a natural resource and can also be considered energy currencies. Secondary fuels are easier for engines to burn, so are often made from crude oil as a way of getting the most energy out as possible.

Furthermore, fuels like methane, butane and propane are found mixed together in their natural resource (which would be the primary energy source) and are separated during the fractional distillation process.

Hydrogen is a fuel that can be obtained chemically from water or methane (and other sources as well), it is considered an energy currency as it doesn't form naturally in any abundance on Earth.

Approximately 95% percent of the primary energy in the world comes from fuels like oil, coal and natural gas[3] (all of which except nuclear fuels produce extensive greenhouse gases when used). Most of the rest of the world's primary energy comes from hydropower, although a small fraction is wind power, solar power, geothermal energy, and tidal power. The amount of electricity that comes from flows increases to about 19% (still mostly hydro) because flows don't have the same limitations of thermal efficiency as heat engines, and flows are used almost entirely for electricity generation.