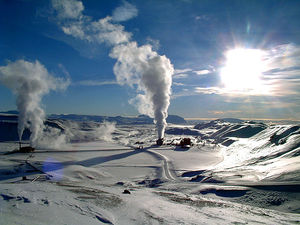 Geothermal energy is extracted in the form of steam or hot water from the subsurface, which can then be used for many purposes (see geothermal electricity and heating). Countries around the world are currently limited by technology when it comes to harnessing geothermal energy, and only those lying on certain "geothermal hot spots" (Figure 2) may tap into this energy effectively.[3]

A benefit of geothermal energy is that it is not intermittent like solar and wind power, which means it can be used at any time of the day, any day of the year. This makes it fairly reliable, and allows its use as a baseload power provider to the electrical grid.

Since not all countries can feasibly extract this energy, geothermal energy is not in prominent use globally. It makes up less than 1% of the world's primary energy supply. Some countries, like Iceland, do get a large fraction of their primary energy from geothermal sources (see the data visualization below). The largest producers of geothermal energy in the world include the United States, China, Turkey, Iceland, Japan, Hungary, and New Zealand.[4]

Heat from the Earth

The interior of the Earth is extremely hot, and even reaches temperatures of over 6000°C at the core, about the same temperature as the surface of the Sun.[5][6] 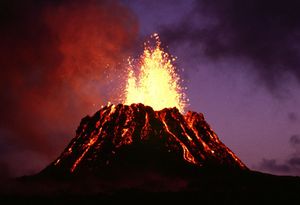 Figure 3. Volcanoes are found along the hot spots seen in Figure 2, due to the Earth's shifting tectonic plates.[8]

Temperatures near the surface are actually not that hot, which means that the energy available for human use is fairly "low-quality" (see Entropy for information on qualities of energy). Most energy applications require higher temperatures to make work in heat engines effective.[3]

If a country is situated on a hot spot (Figure 2), this hot spot may produce high temperature heat that can generate electricity efficiently. These hot spots occur because of their location near tectonic plate boundaries where the crust is thinner, and where plumes of magma may extend close to the surface.[3]

Geothermal energy can become depleted in a specific location, making that particular well site non-sustainable. This problem often comes from people bringing up the underground hot water faster than it can replenish. Various geothermal power plants, such as one at the Geysers in northern California, have over-extracted the water and heat at their sites, resulting in a decline in power production.[3] Water is being re-injected into the site, which may help with this problem. The extraction of geothermal energy must be carefully managed at every site in which it is used in order to keep it sustainable.