Hubbert's peak or Hubbert's curve is a model that approximates the production rate of a resource over a period of time. Specifically, Hubbert's peak refers to the point at which this production rate is at its highest with demand for the resource rising, and after this it predicts a drop in correlation to the increased demand. During this drop, there may be dramatic differences in production and demand as demand continues to increase but production drops overall.[1] Figure 1 shows Hubbert's predicted model compared to US oil production. Although this model can be applied to many resources, it was initially developed as a model for oil production. 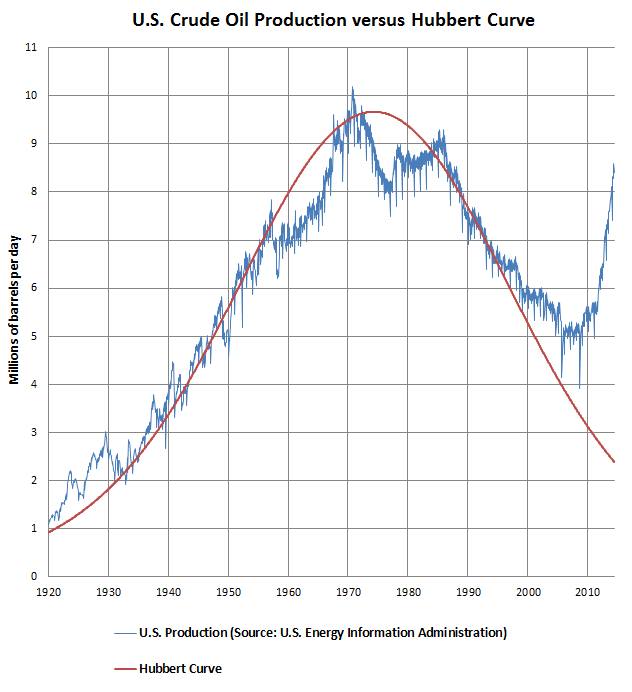 Figure 1. Hubbert's prediction compared to actual US crude oil production, data from EIA. Note that the inclusion of Alaska in the data results in a peak that is not exactly what Hubbert predicted.[2]

In 1956, M.King Hubbert presented a paper to the American Petroleum Institute that reflected on the potential outcome of the steady, exponential growth of fossil fuel use. Particularly, he noted that the rate of consumption of these fuels was greater than the rate at which new reserves were being discovered. Because of this imbalance, Hubbert predicted that crude oil production would peak in the 1970s and then drop drastically over the successive years.[3] This "peak" is shown by the blue curve on Figure 1. On the graph itself, the total area under the curve is the total amount of oil extracted up to a given point in time. Given the symmetric prediction of the peak, it would mean that around 1970 half of the US oil reserves had been used up.

Hubbert's prediction proved to be mostly correct, as US production peaked in 1970 with a dramatic decline after this. Because of this decline, the US has been forced to become a major oil importer.[3] However, there were later unforseen advancements in the production of oil in the US. Mainly, the production of oil from Alaska and advancements in technologies that allowed oil to be extracted from unconventional resources led to what appears to be another peak after the first. Although this growth does exist, the theory of peak oil says that there will be an ultimate peak in oil production when half of the oil reserves remain. The prediction itself was determined by explaining that there is only a finite amount of oil that exists - known as the ultimate recoverable resource - and explained that increasing rates of depletion would result in an eventual peak in the amount that could actually be produced as the resources begin to dwindle. Essentially, this ultimate recoverable resource represents the entirety of a McKelvey box, including all undiscovered resources as well as reserves known to exist.[3] Although the shape of the trend is predicted to be a curve, there are a wide number of external factors that may cause the trends to deviate from this model slightly.

Although Hubbert's prediction was correct for the lower 48 states in the US (clearly Alaska had a big impact on the production), it's unclear if the Earth has hit 'peak oil'. The Earth still has extensive oil reserves and oil resources (please see reserve vs resource for an explanation of the difference). While the oil on the planet is finite, rather than running out of oil, climate change that is happening as a result of human fossil fuel use is proving to be a much bigger problem.