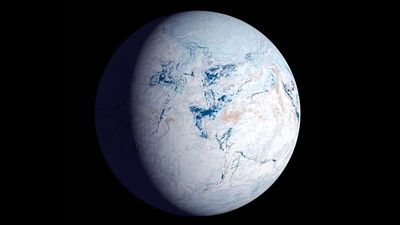 Figure 1: An artist's depiction of what snow ball Earth may have looked like near the end of the Proterozoic Eon.[1]

An ice age is a period of time where global temperatures drop so significantly that glaciers advance and encompass over one third of Earth’s surface both laterally and longitudinally.[2] As a whole, ice ages can last up to hundreds of millions of years, the longest ice age reaching approximately 300 million years. During an ice age, a glacial is the period of time where glacial advancement occurs. An interglacial is the warmer break in between two ice ages where glaciers retreat.[3]

There are many different causes as to why glaciation occurs; the most prominent can be placed into three categories: astronomical, atmospheric, and terrestrial.[2]

Astronomically triggered ice ages are the most common. The Milankovitch Cycles are the three ways in which the Earth’s orbit around the sun changes over the course of tens of thousands of years. One of the three factors that rules the Milankotich cycle are the variations in eccentricity of Earth’s orbit. It is the path of Earth’s orbit around the sun which ultimately affects how much sunlight and radiation hits Earth’s surface, and is the driving factor for Earth’s seasonal changes. Over a period of 105,000 years, the eccentricity of Earth’s orbit varies minimally, however it is enough to cause the growth and melt of ice sheets.[4]

Atmospheric triggered ice ages are a result of either too much or too little greenhouse gases like carbon dioxide (CO2) in the Atmosphere. Too little CO2 results in the atmosphere being unable to trap heat and warm Earth's surface, therefore resulting in major global temperature drops.[2] Alternatively, a major volcanic eruption can result in the release of aerosols into the atmosphere which, once suspended in the atmosphere for a long period of time, reflect sunlight and ultimately cool Earth’s surface.[5]

Terrestrial triggered ice ages are a result of plate tectonic movement disturbing weather patterns. When continents move such that they limit the warm currents from the tropics reaching the poles, the result is the building of large glaciers and the development of an ice age. [6][4]


The video below represents how plate tectonics have historically been a direct cause of major glaciation events:[7]

It is speculated that there have been a total of six major ice ages since the beginning of Earth’s history to present day.

Earth’s most recent glaciation occurred during the Pleistocene epoch within the Quarternary period. The Pleistocene epoch experienced around nine glacier advancements and retreats globally. Presently, geologists mark the ending of the last major glaciation as the beginning of the Holocene period, which began approximately 11,000 years ago. Since the average Pleistocene interglacials have historically lasted around 10,000 years, it is expected that a new glaciation should be occurring soon. However, due to human induced climate change, the next glaciation may take longer to occur than predicted, if at all. [13]