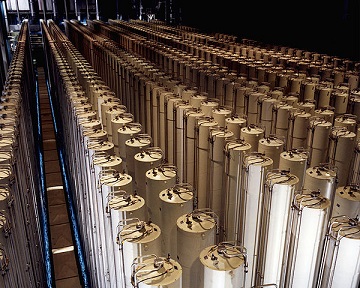 Atoms are the building blocks of matter, and within those atoms are subatomic particles: protons, neutrons and electrons. Protons and neutrons are located in the atoms nucleus and the electrons fly around it. Elements change based on how many protons they contain. For example, the first element on the periodic table is hydrogen who's atom (more precisely its nucleus) contains one single proton. The second element found on the table is helium which contains two protons. Now, the nucleus of an element can have changing amounts of neutrons but it will not change element as long as the number of protons stays the same. These elements with varying numbers of neutrons but the same number of protons are called isotopes. Isotopes of an element all react chemically the same, this is because they are the same element. The only thing that makes them different is their different masses due to the different numbers of neutrons.

Isotope separation is a process of element enrichment by the physical separation of isotopes in a substance. Naturally occurring elements in the earth are often found in ores or in other such amalgamations which contain multiple different isotopes of the certain element. This can raise problems for the applicable uses of certain elements due to the fact that not all of the isotopes are useful. For this reason isotope separation is needed to purify or enrich the required isotope for economic use.

The theory behind isotope separation lies within the different physical properties between isotopes related to their respective masses.[2] Because the different isotopes will have different weights due to a different number of neutrons, they will have different reactions to certain chemical and physical processes. These differences are exploited in order to separate the isotopes. These differences include varying rates of reaction (gaseous diffusion), where in one isotope will have a faster rate of reaction than another and can therefore be isolated after it has undergone the process, but before the slower isotope has. Others include the manipulation of the isotopes mass through different processes which will achieve separation (Gas centrifuge).