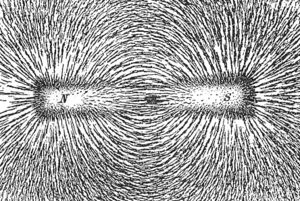 A magnetic field is a vector field, meaning it has a specified magnitude and direction at any point. The SI unit of magnetic field is the Tesla (T) in honor of physicist Nikola Tesla, with units of N/A·m. The Tesla is a huge unit, with a 1 T magnetic field being quite large. A smaller unit—the Gauss (named after the great physicist/mathematician Carl Friedrich Emmanuel Gauss) is one ten thousandth of a Tesla. The magnetic field of the Earth is roughly 1 Gauss, (but it varies depending on where the measurement is taken), so 1 T is a magnetic field ten thousand times stronger than Earth's!

Magnets are materials that have a magnetization caused by microscopic properties of atoms and the magnetic field they produce is characterized by their north and south poles. The direction of these magnetic fields always points from the north pole to the south pole. This convention can be used to determine the force the magnet will apply on a charge, and how one magnet will interact with other magnets.

Magnetic Field of the Earth

The Earth has its own magnetic field, which was originally thought to be from its iron composition in the core, but is now surmised to be created by circulating electric currents in the liquid core.[5] The magnetic field of the Earth protects life from harmful solar winds from the Sun, whose charged particles would otherwise strip away the ozone layer that protects the Earth from harmful ultraviolet radiation (shown in Figure 4).[6] The interaction of the Earth's magnetic field and solar wind produces the well-known phenomena of the Auroras, shown in Figure 5.

Pole Naming Convention of the Earth

Although it is logical to assume that the North and South Pole on the Earth represent the North and South poles of a very large bar magnet, this is not the case. The north pole is the direction that the north end of a compass points. What people on Earth generally refer to as the North Pole in the geographic sense is actually the magnetic south pole, and vice versa. This means that if a compass needle is pointing towards the geographic North Pole of the Earth, the compass needle is aligned with the south magnetic pole.[9][10]