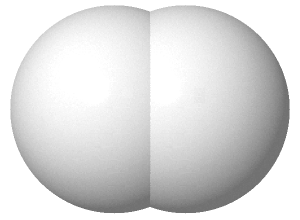 Molecular hydrogen, sometimes called dihydrogen, is a diatomic molecule that is composed of two hydrogen atoms held together by a covalent bond with the chemical formula H2.

For more information on the more advanced topic of how the study of molecular hydrogen is connected to quantum mechanics, see Hyperphysics.

Below is a table of some of the basic properties of molecular oxygen.