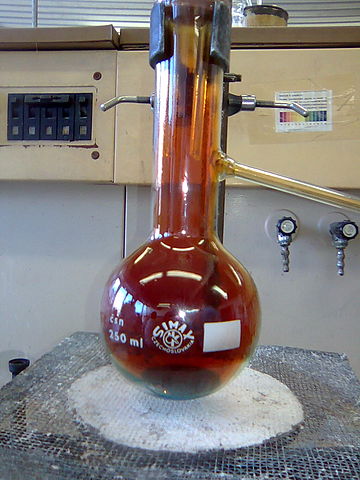 Nitrogen oxides or NOx are a family of poisonous, highly reactive gases that form when fuel is burned at high temperatures. NOx gases are generally brown in colour and are emitted by vehicles as well as industrial sources such as power plants, industrial boilers, cement kilns, and turbines. Nitrogen oxides have problematic chemical reactions in the atmospheric with volatile organic compounds. These reactions produce smog on hot summer days.[2] The two major nitrogen oxides that occur are NO and NO2.

Coal and oil, two major fossil fuels, contain nitrogen. When these fuels are burnt to generate electricity, the produce a type of NOx known specifically as fuel NOx. As well, there is another type of NOx known as thermal NOx which is produced when atmospheric nitrogen and oxygen recombine under high temperatures (such as in the flame of fossil fuel combustion) to create NO.[3] The combustion of coal and oil produces both thermal and fuel nitrogen oxides, while natural gas combustion produces only thermal NOx. As well, uncontrolled oil or coal combustion produces more nitrogen oxides than the combustion of natural gas.

Nitrogen in coal, oil, and natural gas cannot be removed prior to combustion. Thus the removal of NOx is only possible during or after combustion has occurred.[3] During combustion, a Low NOx burner can be used to reduce nitrogen oxide emissions. This burner uses staged combustion to burn fuel at the right air-fuel ratio. This reduces the amount of nitrogen oxide emissions, as burning the fuel in a fuel-rich or fuel-lean environment results in fewer NOx emissions.[3] The use of LNB is useful as boilers can be retrofitted to include these devices, and this retrofitting is fairly inexpensive. Although useful technology, NOx formation is only reduced by 30-55%.[3]

Alone, nitric oxide is non-toxic. Nitrogen dioxide, on the other hand, is potentially toxic to vegetation. Exposure at high enough levels can injure leaves, stunt growth, and reduce yield. As well, when combined with ozone or sulfur dioxide, nitrogen dioxide can cause injury. As well, NOx is a greenhouse gas and contributes to ozone depletion in the stratosphere. Nitrogen oxides are also an important component of acid rain.[4] A final environmental effect of nitrogen oxide pollution is eutrophication. This is the explosive overgrowth of algae which can deplete oxygen in bodies of water, harming the ecosystem.[5] Below is an animated GIF showing how prominent NOx really is. As a pollutant, it can be seen with satellite imagery and the animation below shows how it is concentrated in large cities. However, the progression shows that the amount of NOx in the atmosphere is actually decreasing.

Figure 2. Progression of satellite images showing the reduction of NOx in the air.[6]

The following data visualizations show the sources emitting NOx in Canada. For a more in-depth look at pollution data, including a graph showing how NOx emissions have changed over time, click here.