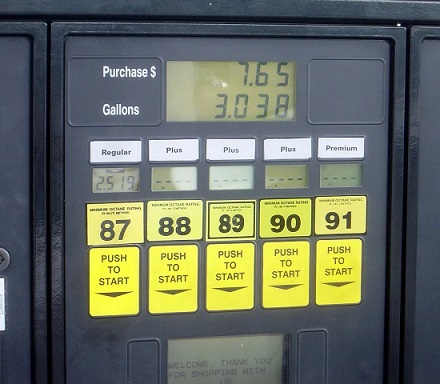 Octane rating, also known as octane number is a measurement of the quality or performance of gasoline. The higher the number, the better the fuel burns within the engine of a vehicle. Higher performance vehicles require fuels with a higher octane rating.

The octane rating of a specific gasoline mixture is based off the ratios of two compounds in the gasoline—iso-octane, a compound with the same chemical formula as octane but with slightly different structure and properties (they are chemical isomers), and normal heptane. These two compounds outline the two extremes of the scale, with pure iso-octane having a rating of 100 and n-heptane having a rating of zero. Thus, a blend of 90% iso-octane and 10% n-heptane would have an octane rating of 90.[2]

The higher the octane number, the more compression from the piston the gasoline can withstand before igniting in the engine. The ability for gasoline to withstand being compressed is most important for vehicles that run on traditional gasoline. In contrast, diesel engines do not compress fuel but rather air and then inject fuel. These engines rely on different ratings, known as cetane numbers.[3]

Generally, the owners manual that comes with new vehicles has manufacturers recommendations as to which octane rating a vehicle should use to prevent this harmful pre-ignition and knocking due to build-up. Most auto manufacturers recommend 87 octane gasoline, but advise using a higher octane gasoline if knocking is an issue with the lower grade.[2]