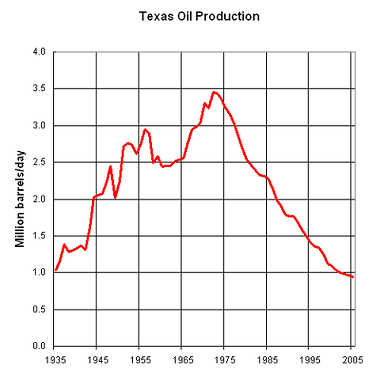 Peak oil is the predicted event, based off of the theory of Hubbert's peak, when the maximum rate of extraction and production of oil is reached. After this point, production will fall continually over time.[2] This peak exists for oil because of the steady exponential growth in the rate of use of oil while the overall amount of oil worldwide is depleted. Although this event is frequently discussed in terms of oil as a resource, there exists a peak point for all non-renewable resources (including resources that have little to do with energy like naturally occurring diamonds or gold). Overall, the production of a finite resource tends to follow a bell shaped curve, with the peak occurring where around half of the resource has been extracted. In theory, this holds true for a single well, oil field, region, and even the world.[3] Note that real production rates are far bumpier than the bell shaped curves produced by simple theories.

The prediction made by Hubbert was mostly correct, even with new supplies from Alaska and the Gulf of Mexico, production of oil in the United States peaked initially in 1970 (with a slight jump with production of oil in Alaska), and production is currently declining.[4] Predictions were first made for the United States, but similar predictions can be applied worldwide. However, modelling the entire world and making predictions is a difficult task as many companies are secretive about the amount of oil in their reserves. 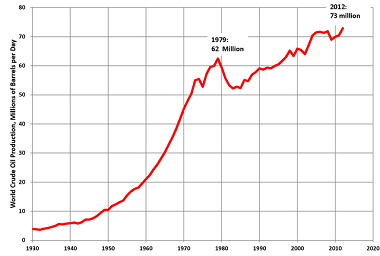 Figure 2. Worldwide production of oil has appeared to peak in the past, but advancements in technology and the discovery of new reserves has prevented a peak that has lasted too long. However, this world production will eventually peak.[5]

One of the biggest issues with peak oil is that currently there is no answer or solution to the problem. Today the world consumes about four times as much oil as it discovers, thus oil is continually running out.[3] Many argue that unconventional sources of oil will be the answer to peak oil because of the enormous reserves of this unconventional oil worldwide. However, the issue with unconventional oil is that it can be more expensive, time-consuming, and difficult to extract this oil.

Through enhanced oil recovery, it is possible to obtain more oil out of existing reservoirs. Additionally, extraction of oil from oil sands is becoming more and more prominent. The advancement of technologies that allow oil to be extracted in these ways could work to increase the size of oil reserves.[4] Additionally, there is large potential for synthetic gas-to-liquids fuels and coal-to-liquids fuels that could provide an answer to peak oil.