Figure 1. A solar panel, consisting of many photovoltaic cells.[1]

A photovoltaic (PV) cell is an energy harvesting technology, that converts solar energy into useful electricity through a process called the photovoltaic effect. There are several different types of PV cells which all use semiconductors to interact with incoming photons from the Sun in order to generate an electric current.

Layers of a PV Cell

A photovoltaic cell is comprised of many layers of materials, each with a specific purpose. The most important layer of a photovoltaic cell is the specially treated semiconductor layer. It is comprised of two distinct layers (p-type and n-type—see Figure 3), and is what actually converts the Sun's energy into useful electricity through a process called the photovoltaic effect (see below). On either side of the semiconductor is a layer of conducting material which "collects" the electricity produced. Note that the backside or shaded side of the cell can afford to be completely covered in the conductor, whereas the front or illuminated side must use the conductors sparingly to avoid blocking too much of the Sun's radiation from reaching the semiconductor. The final layer which is applied only to the illuminated side of the cell is the anti-reflection coating. Since all semiconductors are naturally reflective, reflection loss can be significant. The solution is to use one or several layers of an anti-reflection coating (similar to those used for eyeglasses and cameras) to reduce the amount of solar radiation that is reflected off the surface of the cell.[2] 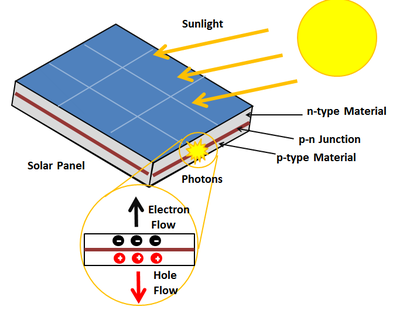 The photovoltaic effect is a process that generates voltage or electric current in a photovoltaic cell when it is exposed to sunlight. These solar cells are composed of two different types of semiconductors—a p-type and an n-type—that are joined together to create a p-n junction. By joining these two types of semiconductors, an electric field is formed in the region of the junction as electrons move to the positive p-side and holes move to the negative n-side. This field causes negatively charged particles to move in one direction and positively charged particles in the other direction.[5] Light is composed of photons, which are simply small bundles of electromagnetic radiation or energy. When light of a suitable wavelength is incident on these cells, energy from the photon is transferred to an electron of the semiconducting material, causing it to jump to a higher energy state known as the conduction band. In their excited state in the conduction band, these electrons are free to move through the material, and it is this motion of the electron that creates an electric current in the cell.

Efficiency is a design concern for photovoltaic cells, as there are many factors that limit their efficiency. The main factor is that 1/4 of the solar energy to the Earth cannot be converted into electricity by a silicon semiconductor. The physics of semiconductors requires a minimum photon energy to remove an electron from a crystal structure, known as the band-gap energy. If a photon has less energy than the band-gap, the photon gets absorbed as thermal energy. For silicon, the band-gap energy is 1.12 electron volts.[6] Since the energy in the photons from the sun cover a wide range of energies, some of the incoming energy from the Sun does not have enough energy to knock off an electron in a silicon PV cell. Even from the light that can be absorbed, there is still a problem. Any energy above the band-gap energy will be transformed into heat. This also cuts the efficiency because that heat energy is not being used for any useful task.[6] Of the electrons that are made available, not all of them will actually make it to the metal contact and generate electricity. This is because some of them will not be accelerated sufficiently by the voltage inside the semiconductor. Because of the reasons listed, the theoretical efficiency of silicon PV cells is about 33%.[6]

There are ways to improve the efficiency of PV cells, all of which come with an increased cost. Some of these methods include increasing the purity of the semiconductor, using a more efficient semiconducting material such as Gallium Arsenide, by adding additional layers or p-n junctions to the cell, or by concentrating the Sun's energy using concentrated photovoltaics. On the other hand, PV cells will also degrade, outputting less energy over time, due to a variety of factors including UV exposure and weather cycles. A comprehensive report from the National Renewable Energy Laboratory (NREL) states that the median degradation rate is 0.5% per year.[7]

Photovoltaic cell can be manufactured in a variety of ways and from many different materials. The most common material for commercial solar cell construction is Silicon (Si), but others include Gallium Arsenide (GaAs), Cadmium Telluride (CdTe) and Copper Indium Gallium Selenide (CIGS). Solar cells can be constructed from brittle crystalline structures (Si, GaAs) or as flexible thin-film cells (Si, CdTe, CIGS). Crystalline solar cells can be further classified into two categories—monocrystalline and polycrystalline, as shown in figure 4. As the names suggest, monocrystalline PV cells are comprised of a uniform or single crystal lattice, whereas polycrystalline cells contain different or varied crystal structures. Solar cells can also be classified by their number of layers or "p-n junctions". Most commercial PV cells are only single-junction, but multi-junction PV cells have also been developed which provide higher efficiencies at a greater cost.