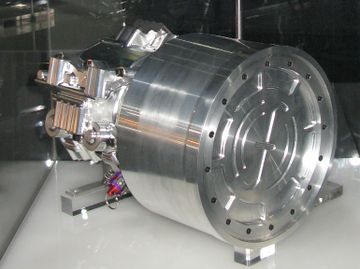 Regenerative braking systems (RBSs) are a type of kinetic energy recovery system that transfers the kinetic energy of an object in motion into potential or stored energy to slow the vehicle down, and as a result increases fuel efficiency.[2] These systems are also called kinetic energy recovery systems. There are multiple methods of energy conversion in RBSs including spring, flywheel, electromagnetic and hydraulic. More recently, an electromagnetic-flywheel hybrid RBS has emerged as well. Each type of RBS utilizes a different energy conversion or storage method, giving varying efficiency and applications for each type.

RBSs are installed along the drive train or fitted to the drive wheels of a vehicle where they inhibit the motion of the wheels using magnetic fields or mechanical torque. These methods of motion inhibition allow energy to be generated under braking, as opposed to friction brakes which simply waste away energy to slow the vehicle by turning the kinetic energy into thermal energy. Due to the maximum charging rate of the energy storage mechanisms, the braking force from a RBS is limited. Therefore, a traditional friction brake system is required to maintain the safe operation of a vehicle when heavy braking is necessary. RBS can improve fuel consumption and reduce the overall braking load taken on by the vehicles friction brakes, reducing the wear on the brake pads.[3]

The idea of a brake that could take the kinetic energy it absorbs and turn it into potential energy for later use has been around since the late 1800s. Some of the early attempts of this technology were to install spring type RBS on front wheel drive bicycles or horse-drawn cabs.[5][6]


The Baku-Tbilisi-Batumi railway started applying RBS in the early 1930s. This is one example of early using of this technology in railway system.[6]

In the 1950s, Swiss company Oerlikon developed the gyrobus, which utilized flywheel as its energy storage method. The effects of gyroscopic motion on the bus soon resulted in it being discontinued.[7]

Since then, RBSs have evolved to be used in almost all electric and hybrid cars, as well as some gas-powered vehicles.

Methods of Energy Conversion and Storage

In electromagnetic system, the drive shaft of the vehicles is connected to an electric generator, which uses magnetic fields to restrict the rotation of the drive shaft, slowing the vehicle and generating electricity. In the case of electric and hybrid vehicles, the electricity generated is sent to the batteries, giving them a recharge. In gas powered vehicles, the electricity can be used to power the cars electronics or sent to a battery where it can later used to give the vehicle an extra boost of power. This technique is currently used in some Le Mans Prototype racing cars.[9]

Electro flywheel regenerative brake is a hybrid model of electromagnetic and flywheel RBSs. It shares the basic power generation methods with the electromagnetic system; however, the energy is stored in a flywheel rather than in batteries. In this sense, the flywheel serves as a mechanical battery, where electrical energy can be stored and recovered.[10] Due to the longevity of flywheel batteries compared to lithium-ion batteries, electric flywheel RBS is the more cost effective electricity storage method. [11]

The spring loaded regenerative braking system is typically used on human powered vehicles, such as bicycles or wheelchairs. In spring RBS, a coil or spring is winded around a cone during braking to store energy in the form of elastic potential. The potential can then be returned to assist the driver while going up hill or over rough terrain.[12]

The hydraulic RBS slows the vehicle by generating electricity which is then used to compress a fluid. Nitrogen gas is often chosen as the working fluid. Hydraulic RBSs have the longest energy storage capability of any system, as compressed fluid does not dissipate energy over time. However, compressing gas with a pump is a slow process and severely limits the power of the hydraulic RBS.

Modern hybrid and electric cars both utilize an electric engine to power the car which makes applying regenerative braking very simple and efficient. In the vast majority of these cars, the transmission of the car is set up such that when the driver applies the brakes, the electric motor reverses itself and applies a resistance to the wheels rather than power. The resistance applied to the wheels is then put through the electric motor where it is used to recharge the batteries.

In high performance electric cars, improving the feel of the car is very important to car manufacturers. Many customers support electric super-cars but are against purchasing them because of the lack of high performance feel. One important aspect of this feel is engine braking. In a standard internal combustion engine, once power is not being applied to the engine, the natural friction inside the engine works to slow the vehicle down. In electric cars, this friction force does not apply; however, car companies such as Mercedes and Porsche have begun to use regenerative braking systems to give the driver the same feel of a gas-powered car while recovering energy for the batteries.[13]

In 2009, Formula 1 (a common type of race car) introduced a regenerative braking system called the Kinetic Energy Recovery System (KERS). The uptake of the system was slow at first and had no teams using it in the 2010 season; however, improvements to the system in the 2011 season made it extremely beneficial to cars and almost all teams adopted some form of the system. Formula one cars use either a four flywheel or electric generator system to store energy under braking. This stored energy can then be utilized by the driver by pushing a button on thier steering wheel. The FIA restricts the use to 6.67 seconds per lap during which the system gives the car an extra 81 hp.[14]

Due to the maximum recharging rate of the circuit and the capacity of battery, the braking force from an electromagnetic type RBS is always limited. Therefore, a traditional friction brake system is required to convert the excess energy from the vehicle. The friction brake can also prevent the loss of braking ability in the case of RBS failure.


RBS can only be installed on driving wheels since a drive train is required for energy recovery. The waste heat is not significantly reduced unless the vehicle is an all wheel drive model.


Adding a RBS to a vehicle means to increase the curb weight of it. Although RBS can improve fuel economy under start-and-stop driving conditions, it may have negative effect on fuel consumption during highway cruising.

The design of RBS involves varieties of sensors and logic control units to adjust the operation of RBS.
The reliability concern of these electrical parts should not be neglected.[15]