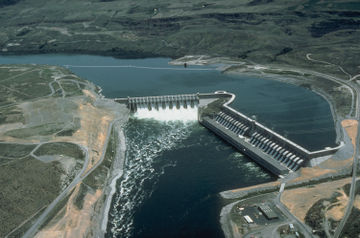 Figure 1. Run-of-the-river systems like the one shown above tend to have larger hydroelectric flow rates than hydro dams that use reservoirs.[1]

Run-of-the-river hydroelectric systems are hydroelectric systems that harvest the energy from flowing water to generate electricity in the absence of a large dam and reservoir—which is how they differ from conventional impoundment hydroelectric facilities. A small dam may be used to ensure enough water goes in the penstock, and possibly some storage (for same day use)[2] The primary difference between this type of hydroelectric generation compared to others is that run-of-the-river primarily uses the natural flow rate of water to generate power—instead of the power of water falling a large distance. However, water may still experience some vertical drop in a run-of-the-river system from the natural landscape or small dam[3] Another main difference between traditional hydropower is that run-of-the-river hydro is used in areas where there is little to no water storage, such as in a river.

There are several classifications of run-of-the-river systems, based primarily on their capacity. The types are outlined in the table below:[4]

It is important to note that some larger scale run-of-the-river plants exist, with outputs of hundreds or thousands of MW.

For a run-of-the-river system to be possible in a given location, there needs to be two specific geographical features. The first is there must be a reasonably substantial flow rate, either from rainfall or a melting snowpack. In addition, there must be enough of a tilt to the river to speed the water up significantly.[4] Therefore, run-of-the-river systems are best implemented in bodies of water with a fairly constant flow rate. If they are built in locations where flow rate is fairly low for a period of time and then peaks dramatically, there will be a large amount of "wasted" water during the peak flow periods as the excess water falls through the spillways. This is because these systems are built to accommodate the lowest flow rate—thus, not be able to handle significantly larger flow rates.

In run-of-the-river systems, running water from a river is guided down a channel or penstock. There can be some change in altitude at this point (from a small dam or the natural landscape) so there may still be some contribution from "falling water." The diverted water is brought to an electricity generating house. In this house, the running water drives a turbine, running a generator and generating electricity. After being used, water is fed to the river downstream.[3]

Although run-of-the-river systems rely primarily on the flow rate of rivers to generate electricity and not a significant amount of water storage, some a small-scale dam or weir to ensure enough water enters the system itself. Pondage (a small amount of water stored behind the dam) is occasionally used, making them generally more reliable as they compensate for any discrepancies in water flow. This stored water isn't like a reservoir because it stores enough for "same day use" not future uses.[4][2]

There are several benefits that exist as a result of using run-of-the-river hydro instead of traditional, dam based hydro. First, traditional hydro dams are expensive and time consuming to build. Comparatively speaking, run-of-the-river systems are less expensive to build and can be built over a shorter period of time. In addition, many areas where large hydro is used frequently—such as in Canada—have developed many of the existing favourable hydropower sites.[4] Run of river systems also avoid some of the environmental problems associated with the flooding, since the pondage is much smaller than the lakes for traditional hydro.[3]

Although there are some favourable aspects to run-of-the-river hydro, the output is significantly lower than large scale hydro. Dam based hydroelectric generation usually provides a lower cost per kWh despite the larger initial investment. Therefore, the absence of the large dam and reservoir means that the power plant will be less reliable for electricity generation. If the water levels are depleted upstream, potentially due to drought conditions, there is less water to run the hydroelectric system.[4]

Compared to the combustion of fossil fuels, run-of-the-river hydro is responsible for fewer greenhouse gas emissions. Most of these emissions are a result of the construction of the system itself, but the operation of the plant itself contributes almost no emissions.[3] Run-of-the-river hydroelectric plants can also be beneficial compared to impoundment dams as the small amount of water storage results in a smaller environmental footprint when compared to dams with large amounts of water storage.

Although the emission impact of these systems is less than the combustion of fuels, there are other environmental impacts that must be taken into account. First, the manipulation of river flows can cause a significant number of environmental impacts. Any diversion in the river changes how the aquatic ecosystem works, which could affect fish populations and the health of the river overall. However, the small head difference in run-of-the-river systems allows for the construction of fish ladders, which could allow fish to move through the system without being harmed or having their migration routes interrupted.[4] As well, the changes in the river basin or water composition could increase species mortality, disrupt migration, or cause an imbalance in biodiversity. Finally, thermal pollution and increased turbidity of the exiting water are possible side effects of sending water through turbines and back into a river.[3]

Overall, it is difficult to determine in general whether or not the damage inflicted on the environment by run-of-the-river systems is outweighed by the relatively small output as compared to large hydro dams. That means that each project must be evaluated on the specific details of the hydroelectric power plants being proposed.