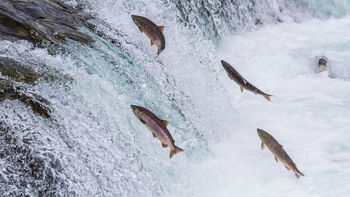 Species migration is the seasonal event where animals move from one preferred location to the next as the ecosystem changes throughout the year. This travel takes a huge amount of energy for the migrating animals, but there are survival advantages. There are many different types of migration depending on the animal such as travelling east and west, north and south, round trips by land, river and sea, elevation gain and loses and movement up or down rivers and lakes.[2]

One reason species migration occurs is due to the fluctuation in seasonal temperatures throughout the year. This can be for the animal's comfort, but is usually because of food availability. For example, an animal that prefers warmer temperatures but lives in the north will remain in the north until temperatures begin to drop resulting in a migration to a warmer climate. Other reasons include more favourable living or breeding conditions for example fish moving up or down river based on their breeding cycles. Elevation is another factor in many animals’ migration. For example the North American Pika, preferring higher altitudes to remain cool, will climb to higher elevations in the summer as temperatures increase.[3]

Many different types of animal migrate. From zooplankton, various fish, insects, most bird species, reptiles and mammals. The table below shows the Guinness records held by various animal migrants.

Habitat range change is a phenomenon related to migration however it is directly related to climate change. Climate change is affecting the migration patterns of animals all over the world. As average temperatures are rising, many animals have to keep up with the changing climate. Many bird species and butterfly species for example are migrating weeks earlier than normal as temperatures rise. When species migrate, they leave behind the diseased and injured thus preventing spread. However, global warming is causing more species to remain in one location most of the year making the transmission of infectious diseases much easier.[4] For an individual animal, it's better if it doesn't have to expend the energy to migrate, but this can be bad for the species.