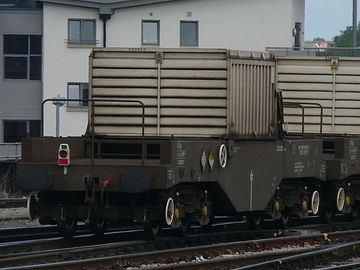 Figure 1. One wagon of a nuclear waste flask train.[1]

After nuclear fuel goes through a reactor once, it is called spent fuel. This is a bit of a misnomer because there's still a fair amount of energy left in the fuel.[2] Visually, spent fuel looks the same as the fuel that goes into the reactor as it is contained in fuel assemblies containing ceramic fuel pellets. However, the composition of the fuel pellets has changed a little; some of the uranium atoms within the fuel have split into smaller nuclei. In current reactors only a very small fraction of the uranium has been split, which is why there's so much energy left in the fuel and it's not completely 'spent'.

Spent fuel are the fuel bundles that can no longer sustain fission in a nuclear reactor. This happens because having fission daughter products make it too hard to keep the nuclear chain reaction going. These products can be a result of fission or radioactive decays that take place inside the fuel bundle.[2] Most of the waste is solid, but some of the atoms in the spent fuel are gaseous. These isotopes require more careful containment so that they do not escape and cause radiation damage. The waste that comes from nuclear power reactors is known as high level waste or HLW, but there is low level waste as well.[2]

The main concern about this spent fuel is that it is radioactive (and stays radioactive for a long time before decaying to stability), however, this radioactivity is never out in the open and exposed to people (or the surrounding environment). This radioactivity also results in the nuclear fuel emitting heat long after removal from the reactor because of the presence of short-lived fission products.[3] This spent fuel is always shielded, generally by placing the fuel underwater until the radiation is minimized to levels where concrete can act as a shield. After this, there are a couple of disposal options for the spend fuel including storage in a deep geologic repository and nuclear fuel recycling.

Spent nuclear fuel varies in its composition. This composition somewhat depends on how long the fuel was in the reactor—but a great deal relies on how long the waste has been out of the reactor. When uranium-235 (the fissile isotope in nuclear fuel) is "burned" inside of a reactor, the percentage of the uranium-235 decreases. The other isotope of uranium, uranium-238 doesn't directly undergo much fission but needs an extra neutron before it can split with thermal neutrons (this is referred to as a fertile nucleus). Uranium-238 does become plutonium, neptunium, americium, and curium in these spent fuel bundles.

Spent fuel still has uranium-235, although the amount has fallen. For a light water reactor (like a PWR or BWR) the uranium-235 levels have fallen to about 1%. In CANDU reactors it's even lower. About 95% of the spent fuel is still uranium-238, which can be used again. The other compounds that now exist in the fuel are heavy isotopes (plutonium, americium, neptunium and curium) and other products of fission. Because uranium exists in this waste, it can be used in fast reactors as a fuel. Some of the plutonium produced can even be used as fuel.

Although there are thousands of tons of spent fuel, it is compact and uniform. This means that regardless of what reactor the spent fuel came from it is similar in its composition— making it relatively easy to manage this waste.[3]

Spent fuel can be stored underwater in spent fuel pools near power plants or be buried deep underground. These pools act both as a shield and a coolant for the fuel. Once cooled significantly, the rods are placed in a dry cask storage. These casks allow for air-cooling of the rods, shielding, and are very sturdy.[3] When stored underground, surveying must be done to ensure that the area is geologically stable so that the waste is not disturbed.[2]

Spent fuel contains large amounts of uranium, therefore, lots of usable fuel still remains.[2] This makes recycling this fuel possible, and the process of performing separations on the spent fuel to access this uranium and plutonium is known as reprocessing.[3] It is important to note that reprocessing is much more expensive and difficult than mining uranium and enriching it. To recycle the waste, the spent fuel is chemically processed and used in fast reactors. This results in less nuclear waste and more energy extracted from raw uranium. Currently, France and Japan recycle fuel one time before it is disposed, and the US previously had a recycling program that was shut down because it created plutonium. Plutonium is arguably the easiest material to make a nuclear weapon with, and thus its production is heavily monitored.[2]