The efficiency of power plants are improved by operating at higher pressures and temperatures. The pressures and temperatures that some power plants achieve are so high that water stops being a liquid or a gas. Instead the water is in a supercritical fluid state. Carbon dioxide can also be put into a supercritical fluid state as well, and which may also someday prove useful to the energy industry.

Baron Charles Cagniard de la Tour discovered supercritical fluids in 1822 while conducting experiments with the discontinuities of the sound of a flint ball in a sealed cannon barrel filled with various fluids at various temperatures. Supercritical water can be formed in nature in underwater volcanoes. Supercritical water can be formed deep beneath the ocean floor due to immense pressure and intense heat of the volcano itself.[1] 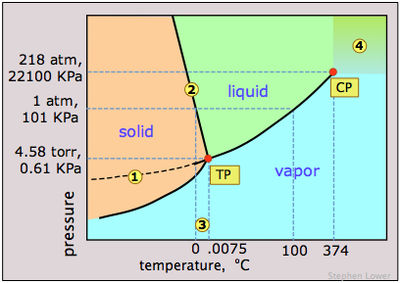 In the phase diagram of water (figure 1), as the temperature and pressure increases, water starts to travel across the solidus line, and reaches the triple point. Triple point denotes a temperature and pressure when all the three phases are present in the water. From that point, as the water follows through the liquidus line, it reaches the critical point (CP) where water has only one phase. Beyond critical point(the area is marked as 4 in the phase diagram), water molecules are not held by hydrogen bond; therefore, they can float around as free radicals. This is one reason why supercritical water or fluid has such a high solubility because of its high reactivity. If pressure or temperature is tampered, the density and viscosity of supercritical water changes. Supercritical water can have very different properties than the liquid water. For instance, supercritical water is acidic and non-polar, whereas liquid water is polar and neutral.[1]

There are many applications of supercritical water, the main application is the use of supercritical water as a green solvent. It is environment friendly and also tuneable, i.e, the pressure and temperature can be changed.[3] Supercritical fluids allow continuous extraction, using economical and remarkably non-toxic materials, and only require venting to separate the solvent from the material removed. The extraction involves applying the supercritical solvent to whatever material is eliminated, for example, coffee beans which are being decaffeinated, and allowing the solvent to remove the substance being extracted.[4]
Supercritical water oxidization process aims to destroy toxic and harmful organic substances and convert them into environmentally friendly products. Examples of the materials treated are dioxins, pesticides, bio-wastes, industrial waste water, sewage sludge, and so on.[3] Supercritical water provides a method to oxidize sewage in a closed system which will burn out all the organics in a wet waste stream. The neatness of this process is that the combustion products are relatively gentle compared with ignition which produces a range of sulfur and nitrogen oxides.[3]

The viedo below shows what supercritical carbon dioxide looks like: