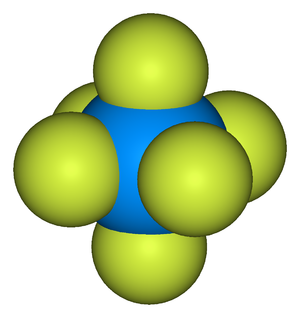 Figure 1. The blue atom in the centre of the molecule is uranium, surrounded by six fluorine atoms. This substance becomes a gas at fairly low temperatures.

Figure 2. A sample of solid uranium hexafluoride crystals in a tube.[1]

Since all enrichment technologies used on an industrial scale require some gaseous medium, uranium hexafluoride is used widely because of its chemical properties, mainly its ability to change state over a fairly small range of temperatures.[3] Uranium hexafluoride is used widely in uranium processing as it can conveniently be used as a gas for processing, but can also be transported and stored as a solid or liquid without the use of extreme pressures or temperatures.

Uranium hexafluoride is used primarily in the gaseous diffusion and gas centrifuge processes that are used to enrich uranium. In gaseous diffusion, mined uranium ore is sent to a plant that produces uranium oxide, more commonly known as "yellowcake". Next, uranium oxide is combined with hydrogen fluoride and fluorine gas to chemically form the uranium hexafluoride.[2] For a more in depth look into the UF6 conversion process sea the uranium enrichment page. For the gaseous diffusion to take place, the uranium hexafluoride must be heated as it is solid under normal conditions, but transforms into a gas if the temperature is raised slightly or the pressure is lowered.[4] Since the 235UF6 molecules are slightly lighter than the 238UF6 molecules, they move more quickly as a gas through diffusion. Thus if uranium hexafluoride is passed through a very long pipe, the gas that emerges at the far end of the pipe will have a slightly higher percentage of 235U. However, the pipe must be extremely long as the lighter 235UF6 diffuses only 0.43% faster than 238UF6.[4]

Uranium hexafluoride is transported worldwide in special transport containers in a solid form. During transport, the pressure inside these containers is maintained below atmosoheric pressure to ensure the uranium remains in solid form.[3]