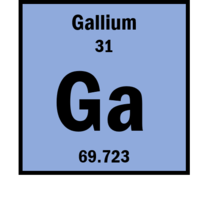 Gallium is the 31st element on the periodic table of elements.[2] Some of its properties are listed below:[2]

Gallium is a soft, light silver metal. It largely exists as a trace element in minerals and compounds. Gallium is unique in its low melting point (average human body temperature is enough to melt it) but a high boiling point.[2] 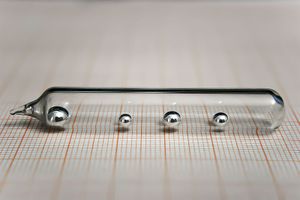 Gallium arsenide and gallium nitride are used in red and blue/green LED lights, respectively. Both compounds are also used in semiconductors. Gallium arsenide has a molecular structure similar to silicon and can act as a substitute, particularly in electronics, and was used in the solar panels for the Mars Rover. Gallium nitride is also used Blu-ray technology, mobile phones, and pressure sensors for touch switches.[2]

Gallium will alloy with most metals and is often used in low-melting point alloys due to its own low melting point. Gallium's high boiling point makes it useful for recording high temperatures that would normal destroy a regular thermometer, since it takes very high temperatures for gallium to reach the point of vapourisation. It is sometimes used as non-toxic substitute for mercury in regular thermometers.[4]

The video below is from the University of Nottingham's periodic videos project.[5] They have created a complete suite of short videos on every element on the periodic table of elements.