Ocean acidification is a major climate change problem, concerning the change in acidic levels of the ocean. Carbon dioxide emissions have been substantially increasing since the start of the industrial revolution. The oceans on Earth absorb approximately 25% of the carbon dioxide that is released into the atmosphere every year.[1] Hence, as atmospheric CO2 levels increase, so do the levels in the ocean. The CO2 absorbed by the ocean is changing the chemistry of the seawater, which is a process called ocean acidification.

Acidification occurs when the pH in a given system decreases. In this case, the pH change is caused by an increased intake of carbon dioxide. As carbon dioxide and other compounds of carbon are emitted into the atmosphere by human activities (such as from motor vehicle emissions or coal-fired power plants), there becomes a net increase of carbon in the atmosphere, with around 30% of anthropogenic CO2 making its way into the oceans.[2]

Carbon dioxide and water react together to form carbonic acid, and this is what is causing increased acid levels in the oceans. The chemical reaction is:[2] 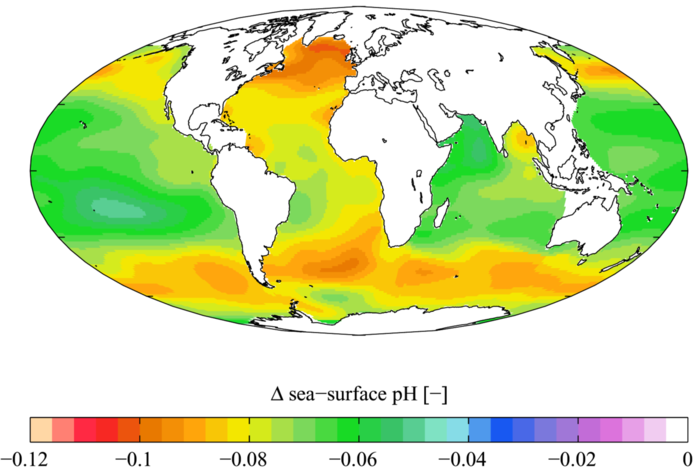 Figure 1. Ocean pH change since the 1700s. Ocean pH levels have decreased (becoming more acidic) in recent years.[3] Remember that the pH is a logarithmic scale, so reducing the pH by 0.1 means that this is 30% more acidic!

How the ocean takes in carbon

The ocean and atmosphere are coupled with one another, causing an exchange of matter between the two. Since the ocean is a tremendous carbon pool that makes use of pressure differences between its gas contents and that of the atmosphere, particles are exchanged through this pressure difference until equilibrium is reached between the two systems. As carbon dioxide levels increase in the atmosphere, as they have been, the ocean and atmosphere must reach a new equilibrium. Through this, the ocean acts as a carbon sink, which has increased carbon dioxide levels in the ocean's surface layers.[4]

Measurements over recent years have indicated an increase of carbon dioxide in the surface layers of the oceans by 1.6-1.9 ppm per year, which is in accordance with the atmospheric increase of 1.5-1.9 ppm/year.[4] For a slightly more technical analysis, see Reference 1.

Although the ocean takes out carbon from the atmosphere that would otherwise contribute to global warming, there are adverse effects because of this. The average pH of the ocean has already decreased by around 0.1 since the industrial era (decrease in pH means more acidity), and since the pH scale is logarithmic, this means the ocean is 30% more acidic than it was prior to this period.[1] This affects many organisms in negative ways, as will be explored next.

Many biological species are expected to be negatively affected by an increase in acidic levels. Calcium carbonate minerals are responsible for building the skeletons and shells of many marine organisms. This means that areas in the ocean with a large organism count typically have a high concentration of calcium carbonate so organisms can calcify to build their shells and skeletons. However, ocean acidification reduces the concentration of calcium carbonate which impacts the ability of certain organisms to produce and maintain their shells or skeletons.[1] Studies have shown that a more acidic environment has a dramatic effect on some calcifying species, including oysters, clams, sea urchins, shallow water corals, deep sea corals, and calcareous plankton.[1] Acidification has also shown to significantly reduce the ability of reef-building corals to produce their skeletons, and some research shows that, by the end of the century, coral reefs may erode faster than they can rebuild.[1] Future predictions estimate that the oceans will continue to keep absorbing carbon dioxide resulting in more acidic ocean water. Based on emission scenarios, estimates indicate by the end of century the sea surface waters could be roughly 150% more acidic, which means a reduced pH that the oceans have not measured in more than 20 million years.[1]

Over a billion people around the world get their main source of protein from the ocean, and hundreds of thousands of jobs are reliant on the well-being of ocean species. Therefore from a human wellness standpoint alone, the acidification of the oceans is a major problem.

The video below by World Bank discusses ocean acidification in more detail, and why it is a problem.