The carbon cycle is the flow of carbon (in various forms, such as carbon dioxide or methane) through the atmosphere, ocean, terrestrial biosphere, and lithosphere.[1] The carbon cycle monitors the exchange of carbon throughout Earth's "carbon reservoirs" which store and transport carbon in many ways.[2] The flow of it is measured in GtC/year (gigatonnes of carbon per year), and it may be stored in gaseous, liquid and solid form in the atmosphere, land and sea.[2]

The amount of carbon in these carbon reservoirs is measured in gigatonnes (GtC): 1 gigatonne, or 1 trillion kilograms of carbon, is equal to the weight of around 200 million elephants! To get a better visualization of such a number, click here.

The natural carbon cycle is kept very nearly in balance; animals and plants emit CO2 to the atmosphere through respiration, while plants absorb it through photosynthesis. The ocean also cycles CO2 with the atmosphere, done in an almost perfect balance. This cycle occurs rapidly, as a typical molecule of CO2 spends only about 5 years in the atmosphere.[3] This shouldn't be confused with how long the carbon in the cycle increases, that's quite a bit longer! See below for more information on the lifetime of carbon in the atmosphere.

Mentioned above was that the carbon cycle has a net increase of carbon each year. The added carbon must come from somewhere, but it may not be immediately clear as to where exactly it comes from. The answer is that this carbon is extracted from underneath the Earth's surface in raw form, in the form of fossil fuels, and then used as a fuel in order to provide various energy needs. Humans are affecting the natural cycle, mostly by the burning of fossil fuels, manufacturing of cement, and removal of forestry, as seen in red in Figure 1 below.[4]

The result is a net increase of carbon in the atmosphere and oceans, which is what causes the warming effect along with ocean acidification. When looking at the numbers in the figure, try to instead imagine 125 million elephants worth of mass for each integer value shown!

The effects of both of these can have disastrous effects on the carbon cycle, as they can work to amplify the effects of added carbon into the atmosphere. For example acidification of the oceans from too much absorbed CO2 can harm marine life, which play important roles in the ocean carbon cycle.[3] 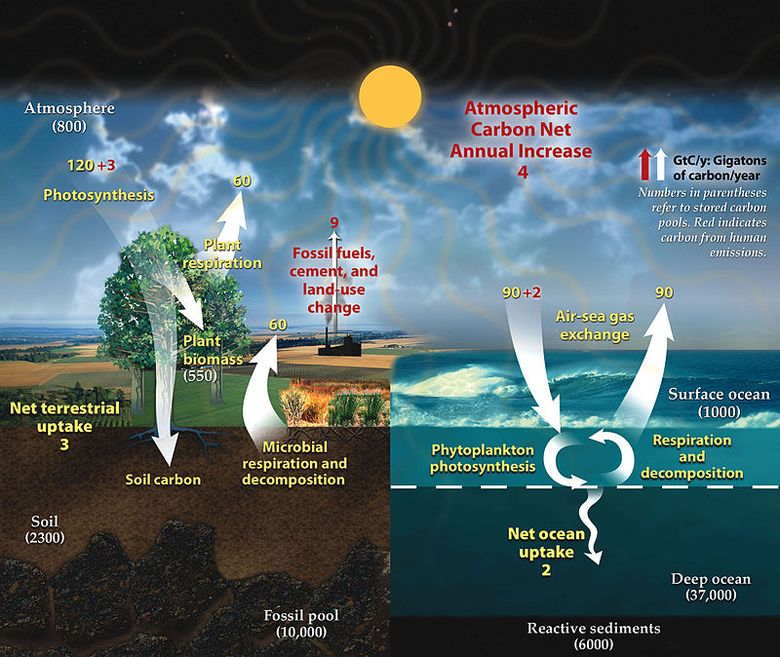 Methane (CH4), carbon monoxide and black carbon are all present in the atmosphere, and each have varying effects on the planet. The amount of each of these in the atmosphere has been increasing rapidly: the amount of carbon dioxide in the atmosphere has increased by about 40% since the industrial era, and methane by about 150%.[6] These levels had been relatively stable for around 10 thousand years prior to this.[7] The climate forcing effect of methane is about 1/3 that of carbon dioxide, so it is considered the second most important greenhouse gas.

The management of CO2 emissions from the combustion of fossil fuels is a central technological, economic, and political concern.[8] 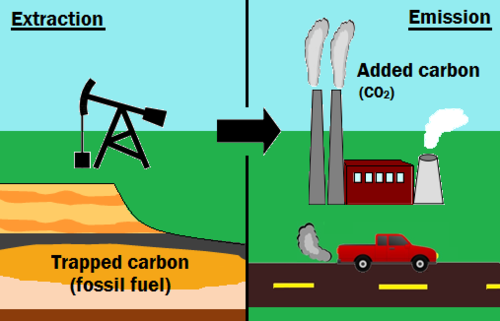 Figure 2. Carbon is trapped underground in reservoirs, extracted and used by humans through the process of combustion. This causes a release of carbon dioxide (and other carbon compounds) which would otherwise not reach the atmosphere, resulting in a net increase of carbon in the cycle.[9]

As mentioned earlier, a typical carbon dioxide molecule will only remain in the atmosphere for around 5 years. This seems promising, however it doesn't tell the full story. If humans were to stop their effect on the carbon cycle instantly, it would take about 100 years for half of the carbon that humans have put in the atmosphere to sink into the deep ocean or land. However as less and less human-induced carbon is present in the cycle, it begins to take longer for the cycle to rid of it. Only after thousands of years will this carbon be nearly totally rid of, and at that point the effects of it might already be too late to reverse.[3]

Simulating effects of carbon in the atmosphere

To see a detailed interactive simulation of how carbon dioxide and methane are intricately connected and how they affect future conditions of the Earth's atmosphere and temperature, click here. Tip: First watch the short "Video Introduction" on the side tab to learn the basics of the simulation, then click "Run this model" on the top. The "How To" and "Things to Do" tabs also give more information on how to use the simulation effectively.