Figure 1: CO2 in the atmosphere has increased dramatically in the last 200 years which is causing a major climate forcing.[1]

Climate forcing is the physical process of affecting the climate on the Earth through a number of forcing factors. These factors are specifically known as forcings because they drive the climate to change, and it is important to note that these forcings exist outside of the existing climate system.[2] The climate system includes the hydrosphere, land surface, the cryosphere, the biosphere, and atmosphere.[3] Examples of some of the most important types of forcings include: variations in solar radiation levels, volcanic eruptions, changing albedo, and changing levels of greenhouse gases in the atmosphere.[4] Each of these are considered external forcings because these events change independently of the climate, perhaps as a result of changes in solar activity or human-caused fossil fuel combustion.

Typically, the climate is affected due to some modification in the Earth's energy flow. Since temperature and other characteristics that define climate are constrained by energy flows in and out of the planet, all of the physical processes that are capable of modifying these flows are important to modeling climate change.

The Earth responds to these forcings by establishing a new balance at a new temperature. This new steady state is a forced steady state as it is not the natural state, rather it was caused as a result of human activities. The rate at which the climate changes in response to forcing - particularly positive radiative forcing - depends on factors such as how well the ocean can store heat.[3]

Forcings can be monitored by looking at time series data for factors that are used to model climates. Generally speaking, the size of these forcings is represented in terms of watts per square meter of the Earth's surface. This represents the extra energy entering the Earth near the top of the atmosphere.[3] Therefore the larger W/m2 value the forcing has, the greater effect the change will have on the climate overall. It is important to note that it is difficult to measure these forcings, and thus forcings are not reflected perfectly. These models are used as estimations to show what the climate was like historically and give predictions for the future.

There are two main types of forcings that exist - positive forcing and negative forcing. Positive forcing warms the Earth, while negative forcing cools it.[4] In Figure 2 below, a number of the major climate forcings, showing the relative amounts with which they contribute and whether they are positive or negative forcings. The grey range arrows for each individual bar shows the uncertainty in the measurement, outlining the overall possible range. From this, it is clear that greenhouse gases are a major contribution to the forcing effect - most notably carbon dioxide, methane, and NO2. This diagram also shows how changes in ozone levels can act as either a positive or negative forcing, depending on whether the change is in the troposphere or stratosphere. As well, it is shown that changes in albedo as a result of building and development, as well as reduced levels of ice worldwide acts as a forcing. The addition of aerosols to the atmosphere also acts as a forcing, either from their direct impact on the atmosphere or by changing how clouds form. Other small effects are included, such as changes in water vapour levels in the stratosphere and effects from linear contrails - the thin "clouds" left behind by aircraft. However, the most important part of this diagram is understanding that a majority of these forcings are anthropogenic - or human caused. The only forcing included which is completely natural is solar irradience. The fact that mainly human-caused positive forcings are what is pushing the climate to change is the major concern with global warming. 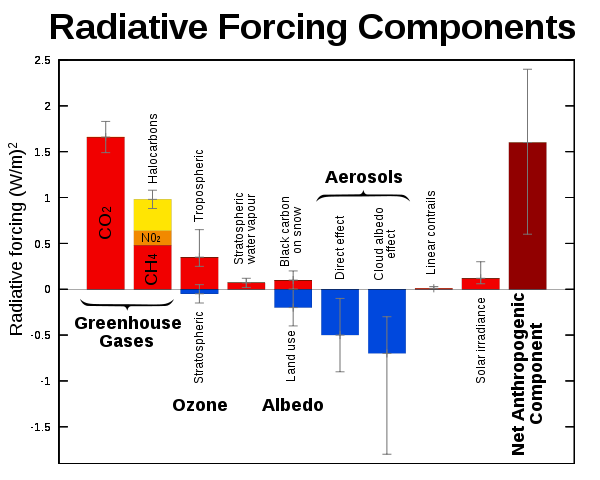 It is important to note that not all climate changes are caused by climate forcings. Aspects of the climate system itself - such as water vapour or clouds - also modify the Earth's energy budget, but instead act as feedback cycles to climate change rather than forcings. Whether something is considered a forcing or feedback typically depends on the definitions one employs for what is external/internal to the climate system, and the timescales of change being considered.

For example, water is constantly being cycled around the Earth, and in the atmosphere exists primarily as water vapour - a gas. The concentration of water vapour is intimately tied to temperature and prevailing meteorological conditions, and is bounded by the fact that evaporation is putting water in the atmosphere while condensation is removing water in the form of precipitation. The residence time of water vapor is very short - days to weeks - in the atmosphere, with global deficits in vapor replenished by an evaporative source and condensation providing a "sink" for any excess vapor that has built up in the atmospheric column. Thus, water vapor concentration cannot change on its own on sufficiently long (decades and longer) timescales, but may change in response to something else - such as atmospheric CO2 that initially causes temperature or dynamics to change. Hence, water vapor is not typically considered a "forcing".[6]