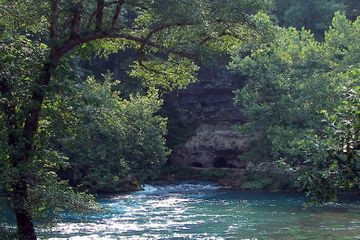 Figure 1. The spring shown above would be considered part of the hydrosphere.[1]

The hydrosphere is the component of the Earth that is composed of all liquid water found on the planet. The hydrosphere includes water storage areas such as oceans, seas, lakes, ponds, rivers, and streams. Overall, the hydrosphere is very large, with the oceans alone covering about 71% of the surface area of Earth.[2][3]

It is important to note that although the hydrosphere is primarily composed of water, there are also some "impurities" or additions to this water that include dissolved minerals, dissolved gases, and particulates. Some of these can be considered pollution, while others are necessary for health of ecosystems.[4] For example, too much sediment is harmful to the surrounding ecosystems, while insufficient levels of dissolved oxygen in the water lead to hypoxic conditions that can harm ecosystems. Thus a delicate balance is needed for healthy ecosystems that surround different components of the hydrosphere. 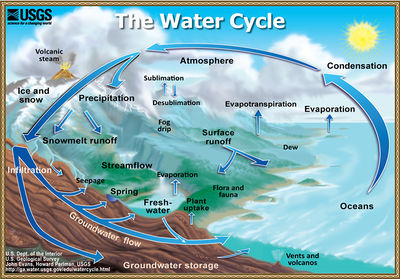 Any water storage area on the Earth that holds liquid water is considered to be a part of the hydrosphere. Because of this, there is an extensive list of formations that make up the hydrosphere. These include:[4]

In recent history humans have drastically changed the hydrosphere. Water pollution, river damming, wetland drainage, climate change, and irrigation have all changed the hydrosphere. Eutrophication caused by the release of fertilizers and sewage into water storage areas has caused aquatic environments to be artificially enriched with nutrients. The excessive algal blooms can result in harmful hypoxic conditions in the water. Acid rain from SOx and NOx emissions from fossil fuel combustion has resulted in the acidification of components of the hydrosphere, harming surrounding ecosystems.[6]

Finally, when humans change the natural flow of water in the hydrosphere by diverting and damming rivers it harms surrounding ecosystems that rely on the water source. This can also result in the drying out of some aquatic areas and excessive amounts of sediment entering streams and rivers.[6]

The properties and motion of the hydrosphere are important in maintaining the diverse climates that exist worldwide. The ocean - which holds 97% of the water on Earth - is especially important to the climate system. The ocean itself serves as a reservoir which contributes to how much solar radiation is absorbed. Since the ocean is so vast, it absorbs a large amount of energy from the Sun. As well, the ocean is important to the climate system as it limits how fast the climate can change. Additionally, the ocean serves to redistribute energy and heat around the globe, contributing to the different average temperatures that exist over the globe.[2]