Hypoxia simply means low oxygen. This can apply to a lack of oxygen in air, but in the context of hydropower hypoxia refers to low concentrations of dissolved oxygen in water. An extreme case of hypoxia is anoxia, when there is no oxygen. When there is a low concentration of oxygen in water it is problematic for ecosystems that rely on this water. Water lacking in oxygen is known as hypoxic water.[1] Generally, hypoxic waters have dissolved oxygen concentrations of less than 2 or 3 ppm.[2] When large stretches of open water become hypoxic they are unable to sustain life, and are thus known as dead zones.[3] Even though fish live underwater, they still need oxygen to survive.

One hypoxic zone that is particularly concerning is the Gulf of Mexico, which is the largest dead zone in the United States.[3] Each year during the summer nutrient-laden fresh water from the Mississippi flows into the gulf. The fresh water is less dense, remaining on top of the gulf water, resulting in a stratification. This prevents oxygen rich surface water from mixing with oxygen poor water lower down, creating hypoxic conditions.[2] 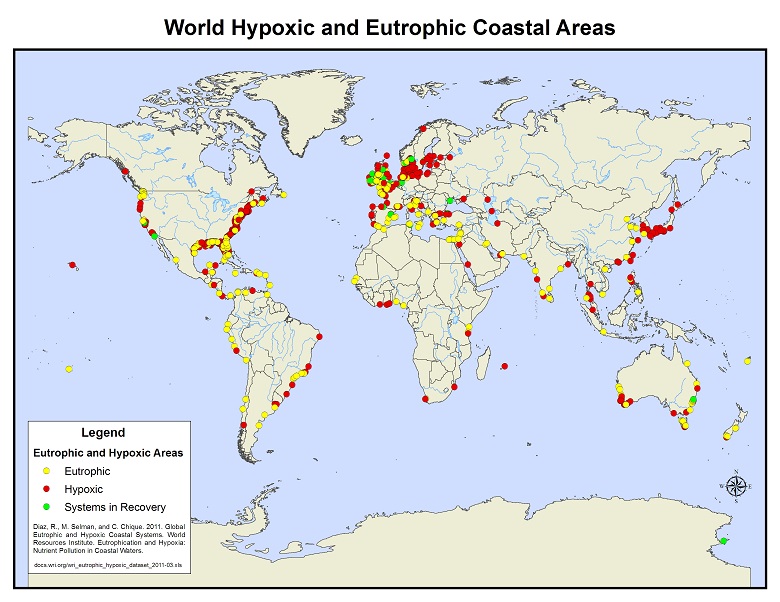 The amount of oxygen in any body of water varies naturally as a result of oxygen input from the atmosphere and a variety of biological and chemical processes. The reduction in oxygen concentration can arise as a result of stratification, or the process of less dense freshwater settling on top of heavier seawater. The lack of mixing restricts oxygen to move into the bottom layers, creating deep hypoxic conditions.[3]

However, hypoxia occurs most frequently as a result of human-induced factors.[3] For example, if there are excess nutrients being introduced to the water - especially nitrogen or phosphorus - the water can become hypoxic. The introduction of these nutrients occurs in a process known as eutrophication, where excess nutrients in a system are introduced and promote algal growth. The hypoxia occurs when algae dies and decomposes, as the decomposition process consumes oxygen. This results in depleted oxygen levels in the water. There are several sources of excess nutrients, including:[2]

Since hydropower facilities act as a river obstruction, these dams affect water flow and quality. In particular, these plants can alter normal levels of dissolved oxygen in the rivers. Waters diverted through a hydropower facility tend to be lower in dissolved oxygen than the rest of the ecosystem and thus hypoxic. When this hypoxic water is released downstream, it reduces the overall oxygen content of the rest of the river. This threatens aquatic life below the dam. Because of this, dissolved oxygen monitoring systems are installed to ensure that oxygen levels below and above the dam are relatively similar.[5]

Impoundment-type facilities tend to be more of an issue because they create a reservoir. In these still waters, it is easy for the water to stratify and create two environments in the water. The bottom layer is often hypoxic as a result of poor aeration.[5] This oxygen-depleted water is then released downstream.

Oxygen exists naturally within water and is extremely important for aquatic life. Oxygen can naturally enter water thruogh a variety of mechanisms, the most common being the process where atmospheric oxygen dissolves and mixes with the water's surface. As well,the presence of moderate amounts of algae result in oxygen being released and dissolved into water during photosenthesis. Finally, fast-moving rivers mix air into the water through a process of aeration.[6]

As expected, the depletion of oxygen in water is not healthy for the ecosystems that rely on the water. Direct effects of hypoxia include numerous deaths of a variety of aquatic animals including fish, mussels, or crabs. Although it seems counter intuitive, fish and other aquatic organisms drown if there is not suitable oxygen in the water. Despite the fact that they live their life underwater, fish take in dissolved oxygen in water by passing this water through their gills. If there is not suitable oxygen in the water, they are not able to obtain oxygen from the water and suffocate. Overall, hypoxia decreases the amount of life in hypoxic zones. As well, hypoxia reduces the ability of young fish to find necessary food and habitat to grow and become adults. Thus fish stocks can be reduced or become less stable. Associated with this, any animal that relies on fish for food would be affected and would likely be forced to move or starve.[2]