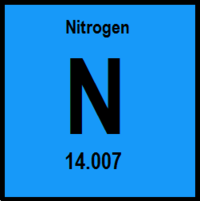 Nitrogen (N) is the 7th element on the periodic table. Nitrogen is the fifth most abundant element in the universe, and it is also fairly common on Earth. Nitrogen is a major component of the Earth's atmosphere - about 78% of the atmosphere is nitrogen.[2] Through a process of fractional distillation, nitrogen can be obtained from liquefied air.

Nitrogen is used in a variety of ways in both its gaseous and liquid form, however nitrogen is also a major component of the group of pollutants known collectively as nitrogen oxides or NOx.

Some properties of nitrogen include:[2]

Nitrogen is used in almost all pharmacological drugs, and is found in nitrous oxide - an anesthetic. As well, liquid nitrogen is available as a relatively inexpensive cryogenic liquid used to preserve biological specimen and conduct low temperature scientific experiments.[3]

As well, another major use of nitrogen is in the production of ammonia (NH3) in a process known as the Haber process. This ammonia is then used to create fertilizers, explosives, and nitric acid.[2]

Nitrogen oxides are harmful to both people and the environment. To humans, exposure to nitrogen oxides can cause increased incidence of respiratory illness and infection. Longer-term exposure can lead to actual changes in the lungs.[5] This is because nitrogen dioxide, a major nitrogen oxide, is an irritant that is a main component of smog. As well, in the atmosphere nitrogen oxides can be transformed into ozone - which has its own adverse health effects.

The video below is from the University of Nottingham's periodic videos project.[6] They have created a complete suite of short videos on every element on the periodic table of elements.