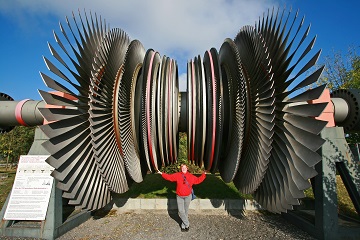 Figure 1. Turbines can be fairly large, the steam turbine above is put into scale with a person.[1]

A turbine is a device that harnesses the kinetic energy of some fluid - such as water, steam, air, or combustion gases - and turns this into the rotational motion of the device itself.[2] Turbines are generally used in electrical generation, engines, and propulsion systems. Turbines are machines (specifically turbomachines) because turbines transmit and modify energy. A simple turbine is composed of a series of blades - currently steel is one of the most common materials used - and allows the fluid to enter the turbine, pushing the blades. These blades spin while the fluid flows through, capturing some of the energy as rotational motion. Fluid flowing through a turbine loses kinetic energy and exits the turbine with less energy than it started with.[2]

Heat engines use turbines (as well as pistons) because they can efficiently extract energy from fluids. Additionally, turbines require fairly little maintenance.

Gas turbines are used frequently in heat engines as they are one of the most flexible types of turbines. One specific application of these gas turbines is in jet engines.[2] In these gas turbines, compressed air is heated and mixed with some fuel. When this mixture ignites it undergoes rapid expansion. The expanding air is pushed into the turbine, causing it to spin. Since they use compressed air, high altitudes do not affect the efficiency of the turbines, making them ideal for use in airplanes.[3]. A diagram of a gas turbine is shown in Figure 2 below.

Figure 2. A diagram of a gas turbine engine.[4]

As well as being used in airplanes, these turbines are used to generate electricity in natural gas-fueled power plants. The combustion gases in this case arise from the combustion of natural gas.[3] 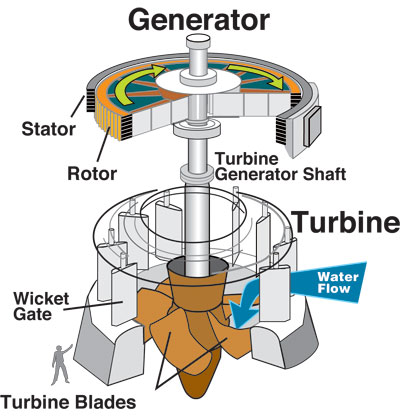 Figure 3. A diagram of a hydroelectric turbine.[5]

In a hydroelectric facility, water is held behind a dam and is released through a penstock. The water, which has kinetic and potential energy, is allowed to fall on a turbine which spins a shaft connected to a generator, thus generating electricity. These turbines are essential in the area of hydropower - the process of obtaining power from water.

The construction of hydroelectric turbines is similar for different types of hydroelectric plants (see run-of-the-river hydroelectricity and impoundment for more information). A row of blades is fitted to some rotating shaft or plate. Water is then passed through the turbine over the blades, causing the inner shaft to rotate. This rotational motion is then transferred to a generator where electricity is generated. There are a variety of different types of turbines that are best used in different situations. Each type of turbine is created to provide maximum output for the situation it is used in (examples of different types of hydropower turbines include francis turbines, kaplan turbines and pelton turbines). There are many factors that must be investigated to determine which turbine should be used. These factors include hydraulic head, hydroelectric discharge, and the cost.[6]

Two types of turbines are generally found in these facilities, and the choice of which to use depends on the characteristics of the hydroelectric facility. These types are reaction turbines and impulse turbines. For more information on how these turbines work and more detailed information on other turbines, click here. 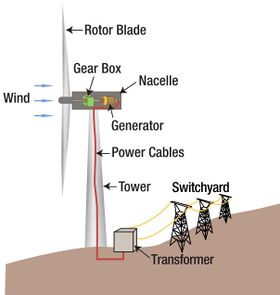 Wind turbines operate by transforming the kinetic energy in wind into mechanical power which is used to generate electricity by spinning a generator. These turbines can be on land, or can be offshore wind turbines. These turbines have three main components. The first of these are the rotor blades which are shaped like aircraft wings to catch the air, causing the blades to turn. The second component is the nacelle, a set of gears and a generator that transforms the blade rotation into electrical energy. Finally, the tower is the large stand that the blades and nacelle are mounted on.[8]