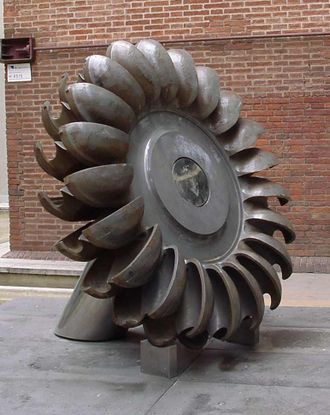 A Pelton turbine or Pelton wheel is a type of hydro turbine (specifically an impulse turbine) used frequently in hydroelectric plants. These turbines are generally used for sites with heads greater than 300 meters. This type of turbine was created during the gold rush in 1880 by Lester Pelton.[2] The water in a Pelton turbine is moving quickly (high velocity head, figure 2) and the turbine extracts energy from the water by slowing the water down, which makes this an impulse turbine.

When used for generating electricity, there is usually a water reservoir located at some height above the Pelton turbine. The water then flows through the penstock to specialized nozzles that introduce pressurized water to the turbine. To prevent irregularities in pressure, the penstock is fitted with a surge tank that absorbs sudden fluctuations in water that could alter the pressure.[3] Unlike other types of turbines which are reaction turbines, the Pelton turbine is known as an impulse turbine. This simply means that instead of moving as a result of a reaction force, water creates some impulse on the turbine to get it to move.[2] 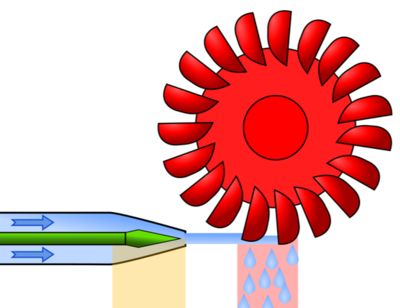 Figure 2. A nozzle turns hydraulic head into a high velocity (with high velocity head) stream of water which hits the Pelton turbine and makes it spin. The water coming out the bottom has very little energy left.[4]

The Pelton turbine has a fairly simplistic design. A large circular disk is mounted on some sort of rotating shaft known as a rotor. Mounted on this circular disk are cup shaped blades known as buckets evenly spaced around the entire wheel. Generally, the buckets are arranged in pairs around the rim.[2] Then nozzles are arranged the wheel and serve the purpose of introducing water to the turbine. Jets of water emerge from these nozzles, tangential to the wheel of the turbine. This causes the turbine to spin as a result of the impact of the water jets on the buckets.[3]

The operation of a Pelton turbine is fairly simple. In this type of turbine, high speed jets of water emerge from the nozzles that surround the turbine. These nozzles are arranged so the water jet will hit the buckets at splitters, the center of the bucket where the water jet is divided into two streams. The two separate streams then flow along the inner curve of the bucket and leave in the opposite direction that it came in. This change in momentum of the water creates an impulse on the blades of the turbine, generating torque and rotation in the turbine.[3]

The high speed water jets are created by pushing high pressure water (such as water falling from high heads) through nozzles at atmospheric pressure. The maximum output is obtained from a Pelton turbine when the impulse obtained by the blades is maximum, meaning that the water stream is deflected exactly opposite to the direction at which it strikes the buckets at. As well, the efficiency of these wheels is highest when the speed of the movement of the cups is half of the speed of the water jet, as seen in figure 3.[2]

For more information on the operation of Pelton turbines, click here.

Figure 3. A three dimensional model of a Pelton turbine. These turbines tend to spin rather quickly, to go with the high velocity head in figure 2.