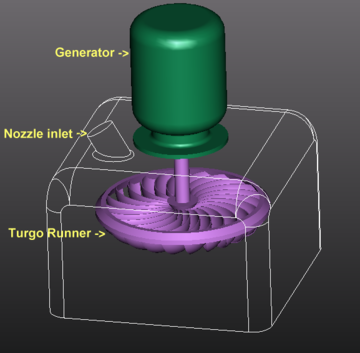 Figure 1. A diagram of a Turgo turbine system.[1]

The Turgo turbine is an impulse turbine, and can handle flow rates that are higher than those a Pelton turbine can handle. This ability to deal better with large volumes of water gives the Turgo turbine an advantage when used in hydroelectric plants that have medium hydraulic heads.[2] Although they are better able to deal with high flow rates, Turgo turbines are slightly less efficient.[3]

Since the runners on these turbines are smaller and faster spinning, some Turgo turbines can be connected directly to a generator instead of having to use a speed-increasing transmission. This direct attachment is shown in Figure 1.

The design of a Turgo turbine is very similar to that of a Pelton turbine. Essentially, a Turgo turbine is a Pelton turbine cut in half.[3] A large circular disk is mounted on some sort of rotating shaft known as a rotor. Mounted on this circular disk are cup shaped blades known as buckets evenly spaced around the entire wheel. Then nozzles are arranged the wheel and serve the purpose of introducing jets of water to the turbine. Jets of water emerge from these nozzles at some relatively shallow angle. This causes the turbine to spin as a result of the impact of the water jets on the buckets.

The operation of a Turgo turbine is very similar to that of a Pelton turbine. In this type of turbine, high speed jets of water emerge from the nozzles that surround the turbine. These nozzles are arranged so the water jet will hit the buckets on one side at an angle of around 20°.[3] This shallow angle allows the water stream to exit on the other side instead of being diverted backwards. Since the incoming and outgoing jets don't interfere like they do in Pelton turbines, this type of turbine is able to accommodate a higher flow rate.