In a hydroelectric facility, the amount of energy harnessed depends on the difference between the headwater level in the reservoir upstream of the dam and the tailwater level below the hydroelectric dam. This is known as the hydraulic head difference and it represents the amount of energy that can be transformed into electricity by the turbines and generators. More detailed calculations show that not only the difference in height of the water determines how much energy can be harnessed, but there are a variety of losses known as head losses. These head losses occur as a result of friction in pipes. When head losses are accounted for, the actual amount of energy that can be harnessed is reduced. This reduced value for hydraulic head with the losses accounted for is known as the effective head.

The water in the reservoir, which is at a higher altitude has more gravitational potential energy because it is at a higher vertical position than the tail race. The energy used to generate electricity by moving the turbines arises from the utilization of gravitational potential energy of the reservoir water as it moves down through the penstocks. The use of Bernoulli's equation can help illustrate this process. Overall, hydraulic head is a way to represent the energy of energy of stored a fluid - in this case water - per unit weight. 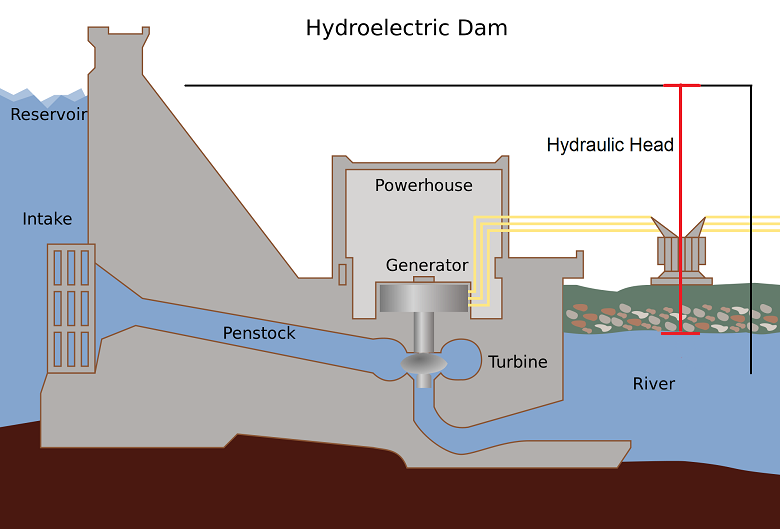 Figure 1. A labelled diagram of a hydroelectric plant, including the hydraulic head.[3]

The value for hydraulic head is used in the hydroelectric power equation to determine the available power of a hydroelectric system. It is one of the main components in this equation, represented by:[1]

Note that the larger the head difference in the expression above, the more potential mechanical energy the water in the reservoir has.

There are three main classifications of dames based on the hydraulic head differences: high, medium, and low. The characteristics of these types are described below.

Head differences of 100 meters or higher are considered high head. In this type of plant, water travelling through the turbine comes from a significantly higher elevation, meaning that the system needs a smaller volume of water to produce an equivalent amount of energy.[1] These systems generally also require smaller turbines since there is less water flowing through the turbine.

In addition to a smaller turbine, a longer penstock is needed to guide the water down from the high elevation reservoir. Generally, large hydroelectric installations are either high or medium head.[2]

Medium head systems generally have head differences between between 10 and 100 meters. The penstock in a medium head dam is slightly shorter than a high head dam as there is less of an elevation drop. This type of dam relies both on a significant volume of water flowing and a significant drop in height of the water.

Low head dams are usually classified as systems with head differences of around 10 meters or less. These low head hydro turbines are generally used in facilities such as run-of-the-river systems where there is a flowing river with little elevation change.[2]

These low head systems usually transport large volumes of water and thus require larger turbines to efficiently convert water energy into electricity. In these installations, a large dam isn't needed to barricade water as there is very little water storage.[1]

The height difference between the water reservoir and the tail race in a hydroelectric facility is termed the gross head and it determines the maximum amount of power that can be produced. However, energy losses occur whenever water flows through pipes due to friction and this reduces the actual rate of power production. These losses reduce the overall head and result in a number known as the effective head or net head. Effective head is equal to the gross head minus the sum of all head losses.[1] Head losses occur in all hydroelectric facilities, and are classified as major and minor head losses. These hydraulic head losses are measured, calculated, and expressed in the same way hydraulic head is, in the equivalent height of water in meters. In this case, you subtract the amount of power lost through head losses from the overall gross power to get the actual net power one can obtain. The equation can be shown as:

Types of head losses include:[4]