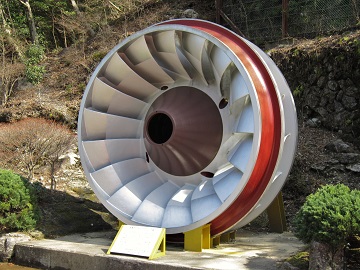 Figure 1. A Francis turbine, the most commonly used type of hydro turbine is classified as a reaction mixed flow turbine.[1]

Hydro turbines are devices used in hydroelectric generation plants that transfer the energy from moving water to a rotating shaft to generate electricity. These turbines rotate or spin as a response to water being introduced to their blades. These turbines are essential in the area of hydropower - the process of generating power from water.

Generally, the construction of turbines is the same. A row of blades is fitted to some rotating shaft or plate. Water is then passed through the turbine over the blades, causing the inner shaft to rotate. This rotational motion is then transferred to a generator where electricity is generated. There are a variety of different types of turbines that are best used in different situations.[2] Each type of turbine is created to provide maximum output for the situation it is used in.

The type of turbine selected for any given hydropower project is based on the height and speed of the incoming water - known as the hydraulic head - and the volume of water that flows known as the hydroelectric discharge. Efficiency and cost are also factors to be considered.[3]

Hydro turbines can be classified based on how water flows through the turbine itself. When passed through a turbine, water can take a variety of different paths. This leads to three categories of water flow through turbines:[2]

Most hydro turbines tend to have mixed flows.

Another criteria used to classify turbines is whether or not the liquid pressure changes when flowing through a turbine. There are two types of turbines that emerge from this classification, explained below.[2]

In impulse turbines, the pressure of the liquid doesn't change in the turbine itself. Instead, pressure changes occur only in the nozzles that direct water flow to the turbine, while the turbine itself operates at atmospheric pressure. These turbines are composed of a jet nozzle or series of nozzles that direct water to the blades of a turbine. Multiple nozzles are usually used where a large wheel isn't feasible. When the water strikes the blades (designed specially to reduce drag), it changes velocity. This leads to a change in momentum, exerting a force on the turbine blades. These turbines rely on the ability to take all kinetic energy from the water to have high efficiencies. Unlike reaction turbines, impulse turbines do not need to be submerged. Types of impulse turbines include Pelton turbines, Turgo turbines, and Crossflow turbines. For more information on where these turbines are used and how they are constructed, follow the links to their respective pages.