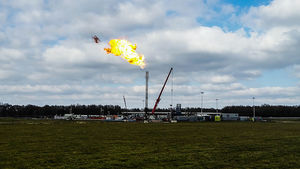 In its unprocessed state, raw natural gas is composed of varying quantities of methane, ethane, propane, butanes, and pentanes. Often impurities such as oxygen, hydrogen sulfide, nitrogen, water and carbon dioxide are also present.[2] Once natural gas has been processed for consumption, consumer natural gas is primarily methane with trace amounts of other molecules.

Like all fossil fuels, natural gas formed from the decomposing remains of animals and plants that lived millions of years ago.[4] The high pressure and temperatures present deep underground facilitated the conversion of plant and animal matter to hydrocarbon fuels.

Consumer natural gas (Sales gas) is a very flexible energy currency. It's used for many things, especially in the home. Some common examples are:[4]

Many buildings, ranging from corporate offices to restaurants and even swimming poolsrely on consumer natural gas for heating.[4] Additionally there are industrial uses, for example in the Canadian province of Alberta, residential and commercial usage account for only 25% of Alberta’s usage.[4] The remaining 75% of natural gas used in Alberta is consumed by the industrial sector in applications like petroleum refining, food processing, metal, plastic and glass industries, and the pulp and paper industry.

A growing use for consumer natural gas is the natural gas vehicle (NGV), which has lower emissions than diesel engines or gasoline engines.

As the demand for natural gas rises around the world, so does the need to transport it overseas. One method of transporting natural gas is in it's liquefied form, known as LNG, and this is done using large ships.

According to Natural Resources Canada, Canada has a natural gas resource of 1,220 trillion cubic feet.[5] While a little over 15% of that natural gas has been recovered, the rest is contained in four types of deposits, one is conventional and the other three are unconventional: Shale gas deposit, Tight gas deposit, and coal bed methane.

Natural gas has a high energy density (for a fossil fuel) and flexible applications, which make it a popular fuel. People advocating for natural gas often point to it as the cleanest burning fossil fuels.[2] Even as a cleaner fossil fuel, natural gas is still made up of hydrocarbons and burning it releases CO2 and other pollutants (NOx being a problem specifically). Natural gas use is often an improvement over coal, however, its combustion still contributes to air pollution and climate change.

Both natural gas extraction and electrical generation suffer from NIMBY (Not in my back yard syndrome) opposition. NIMBY syndrome is when people consent to an idea, as long as they will not be directly affected by it. Click here for data on Canadian support for natural gas as an energy source.

With advances in fracking techniques, natural gas reserves are expected to last a long time. See the interactive graph below to explore how much natural gas is used in countries around the world.