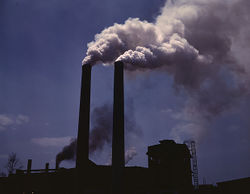 Air pollution is the presence of any substance at high enough levels in the atmosphere to threaten the health of human, animal and plant life.[2] There are many types of pollutants that can be emitted in a variety of ways however they are often split into two categories, natural and human.

Human emission sources can also be categorized as either point sources or mobile sources. Point sources are fixed in a single location, such as a power plant, and emissions can be traced back to that source. Mobile sources, on the other hand, include things like motor vehicles, the emissions of which cannot be traced to any single vehicle directly, and are often taken as an aggregate instead.

Air pollution is becoming more dominant as urban populations become larger and more common. Typical phenomena in large cities include industrial and photochemical smog, produced when large quantities of pollutants are introduced into the atmosphere in a short time-span, causing all sorts of adverse effects which are explored below and on other pages interlinked to within this page.

Air quality is worsened when various pollutants are introduced into the air, especially in high quantities over a small area. These pollutants can be emitted by many sources, but the most dominant contributor within cities are vehicles burning gasoline and other oil products. The burning of coal also produces many harmful pollutants, however in most places around the world coal is burned relatively far away from cities, so the air pollution from coal plants has a less visible effect on air quality.

The pollutants that deteriorate air quality include nitrogen oxides, sulfur oxides, particulate matter, volatile organic compounds, and more. These are considered primary pollutants, since they are emitted directly into the atmosphere. A majority of them also react in the air to form what are called secondary pollutants, and these include ozone and peroxyacyl nitrates (PANs).[4] A combination of many of these leads to the formation of smog and photochemical smog, which may stay over a given location for an unsafe amount of time.

The emissions of greenhouse gases such as carbon dioxide and methane are of global concern, due to the global warming effect their presence in the atmosphere brings about. This type of air pollution is not as noticeable on a daily basis compared to urban pollution, and this makes it more difficult for people to realize the adverse effects of these emissions. There are many indicators of a warming world such as rising sea levels and ocean heating which support the effect that these gases are having on the global climate.

Currently CO2 levels in the oceans and atmosphere are on the rise, and this increase can mostly be attributed to human activities,[5] known as anthropogenic carbon emissions. Carbon dioxide is emitted in the process of hydrocarbon combustion, which occurs when hydrocarbon-rich fossil fuels are burnt in order to provide energy. There are many sources for this, from the exhaust gas of an automobile, to the smokestack from a coal-fired power plant. 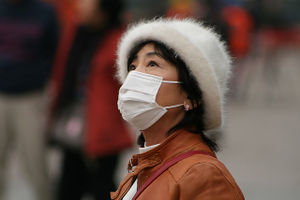 Air pollution can be attributed to many negative effects, including poor visibility, difficulty breathing, disease and even death.[7] Many Asian countries are suffering the most from poor air quality, and experience daily smogs, leading to a high number of deaths due to lung and heart disease.[8] Many developing countries around the globe are also experiencing the same consequences.

Acid rain occurs when water in the air combines with nitrogen and sulfur oxides, then falls to the Earth. It is around 25 times more acidic than normal rain and has many damaging effects on vegetation, lakes, fish, buildings and other structures. It can also cause respiratory diseases in humans, especially those that have bad health.[9] When lakes and other bodies of water become too acidic, typically less than a pH of 6.0, plants and aquatic life begin to suffer.[10] Fish reproduction ability falters, with death or deformity being widespread among younger fish. Amphibians and invertebrates suffer similarly, which means that acidic lakes have very little to no animal life.[11]

The key to managing air pollution is to prevent it from happening in the first place. There are many ways to accomplish this, using technologies such as scrubbers, electrostatic precipitators, and more. Please visit our page on air pollution control devices for information on how air pollution is dealt with.

In recent years the effects of air pollution have been realized in most developed countries, resulting in more stringent guidelines against pollution. Canada for example relies on government actions to reduce emissions from industries, transportation vehicles, and other sources, which has resulted in better outdoor air quality.[12]

The line graph below is used primarily to show whether or not levels of emissions have been improving for Canada as a whole, particularly with efforts to scrub flue gases clean with various air pollution control devices. The drop down bar allows for the selection of various pollutants. For information on what gives off these pollutants specifically please see detailed pollution data. For province by province time series please see Environment Canada.