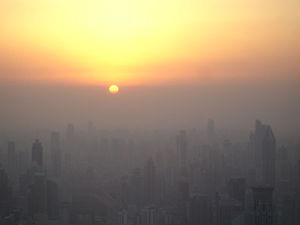 Photochemical smog is a type of smog produced when ultraviolet light from the sun reacts with nitrogen oxides in the atmosphere. It is visible as a brown haze, and is most prominent during the morning and afternoon, especially in densely populated, warm cities.[2] Cities that experience this smog daily include Los Angeles, Sydney, Mexico City, Beijing, and many more.

Photochemical smog forms from a complex process, however the source of it is quite apparent. The largest contributor is automobiles, while coal-fired power plants and some other power plants also produce the necessary pollutants to facilitate its production. Due to its abundance in areas of warmer temperatures, photochemical smog is most common in the summer.[3]

It forms in the morning when a tremendous number people are driving their vehicles to work. Nitrogen oxides produced in the car engine are introduced into the atmosphere, which may combine with water to form nitric acid or react with sunlight to produce singular oxygen atoms, which then combine with molecular oxygen to produce ozone.[2] The nitric acid may precipitate to the Earth resulting in acid rain, or remain in the smog. Due to the direct production of it by vehicles, the smog forms over cities where many people may encounter its adverse health effects.

Hotter days mean more photochemical smog, especially in the densely populated cities such as those mentioned above. As more and more urban populations arise around the globe, this problem is only expected to increase.[4]

Nitric oxide (NO) and nitrogen dioxide (NO2) are emitted from the combustion of fossil fuels, along with being naturally emitted from things such as volcanos and forest fires (it is the immense concentration of these pollutants within cities that is of the most concern however, as natural emissions tend to spread out over larger areas). When exposed to ultraviolet radiation, NO2 goes through a complex series of reactions with hydrocarbons to produce the components of photochemical smog—a mixture of ozone, nitric acid, aldehydes, peroxyacyl nitrates (PANs) and other secondary pollutants.[4]

NO2, ozone and PANs are called photochemical oxidants because they can react and oxidize certain compounds in the atmosphere or within a person's lungs that are not normally oxidized. Even small traces of these chemicals can affect the respiratory tract of humans and animals, and damage crops and trees.[4] 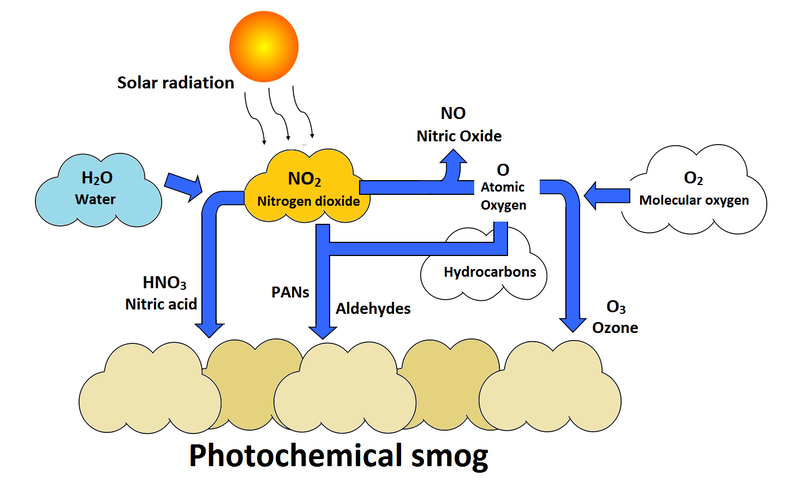 Figure 2. Photochemical smog formation; sunlight reacts with NO2 which then interacts with other molecules in the air to form smog.[5]

Photochemical smog has many adverse effects. When combined with hydrocarbons, the chemicals contained within it form molecules that cause eye irritation. Radicals in the air interfere with the nitrogen cycle by preventing the destruction of ground level ozone. Other effects include reduced visibility and respiratory ailments.[3]

Ground level ozone is also produced which has various effects on the human body. For more information, visit the ozone page.