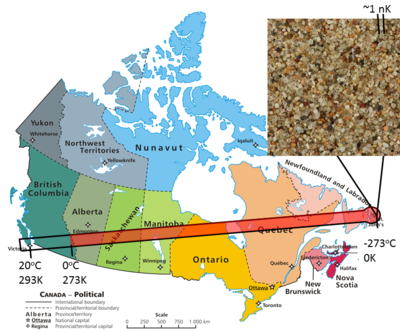 Figure 1: If a thermometer were to stretch across Canada, (from downtown Victoria to St. Johns) Victoria would be room temperature, water would freeze around the BC-AB border and absolute zero would be at the harbor in downtown St. Johns. Bose Einstein Condensates are a few nanokelvin (a few grains of sand) away from the end.[1]

Temperature is the reading obtained from a thermometer, which measures how hot or cold a substance is. At a microscopic level, temperature describes the average kinetic energy of molecules within a material or system. It is a measurable physical property of an object and can be considered with other measurable physical properties such as velocity, mass, and density (just to name a few).

Temperature is typically seen in units of degrees Celsius or °C (in some countries the Fahrenheit scale is used); however, in the scientific community, temperature is seen in SI units—Kelvin or K (notice it's K not °K). Both Kelvin and Celsius scales have their advantages and disadvantages:

Celsius is a much more "user friendly" or intuitive way to measure temperature; at 0°C—water freezes, and at 100°C—water boils. Celsius makes sense and it's much easier to judge how 25°C might feel than how 298 K would, and to be clear, 298 K would feel fine.

Why bother with Kelvin?

The Kelvin scale happens to be extremely useful (and necessary) when doing scientific calculations and measurements. Absolute zero is 0 K (converting to Celsius it's -273.15°C) and is the lowest temperature the laws of physics allow—there could never be temperatures below 0 K. In this respect it makes perfect sense to use the Kelvin scale, 0 being the "absolute" lowest and increasing from there. For more information (and a handy calculator) visit the page Kelvin.

An overwhelming percentage of scientists agree that climate change is a major issue facing the world.[2] Most climate scientists predict a 1% increase in the average global temperature by the year 2100.[3] This number sounds negligible if thinking in Celsius, but a 1% change means the Kelvin scale must be used. Unfortunately, in order to do this calculation, the numbers have to be converted to Kelvin and after doing the proper conversions and calculations an increase by 1% on the Kelvin scale would actually result in an average global temperature of ~18°C by 2100 (because 291 K is roughly 1% warmer than the current average temperature of the planet, 288 K). This may not seem very high, but an increase of ~3°C is quite worrying.