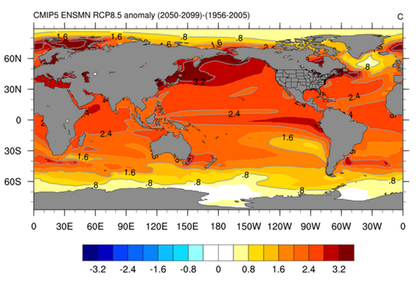 Figure 1. Map showing the change in average ocean surface temperatures from 1956-2005 (click to enlarge). Parts of the northern hemisphere have increased in temperature by over 3 degrees celsius.[1]

Ocean heat is the energy associated with the change in average ocean surface and bulk temperatures as a result of both natural and human activities. This heating comes as a result of increased greenhouse gas levels in the atmosphere, which are known to be attributed to human emissions.[2]

Ocean warming accounts for roughly 93% of the additional energy stored from heat on the Earth, with the other 7% including all of the Earth's atmosphere (1%), land (3%) and ice (3%) (see Figure 2). The upper 700 meters of the ocean contributes much more to this value, since it is harder for light to penetrate into deep ocean layers, and heat transfer by conduction and other ocean currents is generally slow.[3] The distribution of this warming is not uniform, as can be seen from Figure 1, and depends on ocean water circulation. 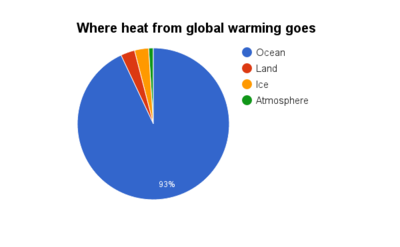 Figure 2 This figure shows the percentage of additional heat stored in Earth's main reservoirs, as a result of greenhouse gases in the atmosphere. Ocean heat accounts for an astounding 93% of this heat, which causes many adverse effects around the entire planet.[3] [4]

Impacts of this warming

The knowledge of how oceans have changed in recent years is extremely important, however due to its coupling with the atmosphere it is also extremely complex. Since both the atmosphere and ocean transfer heat from the equator to higher latitudes, any modification in ocean circulation can be a source of climate change. It is also important because any sea level increase directly affects highly population coastal areas.[5]

Ocean salinity can change for various reasons as a result of warming:[5]

In general, as the intensity of the hydrologic cycle (water cycle) increases, as is expected with global warming, the salinity of oceans is expected to change more drastically.

The melting of ice - particularly sea ice - and corresponding decrease in albedo is of great concern. Ice is white and highly reflective - corresponding to a high albedo (reflectivity). This reflectivity prevents some incident sunlight from being absorbed.[6] However, when ice melts the vegetation, soil, or water beneath it is exposed. These surfaces are darker and heat faster and thus have a lower albedo. As these surfaces with a lower albedo are exposed to the Sun, they absorb more solar radiation than the ice would have. This absorption further raises temperatures and causes even more ice to melt, continuously heating and pushing the cycle, known as a positive feedback cycle. This feedback can act more quickly over the ocean than over land as sea ice is able to melt more quickly than large, continental ice sheets.[7]

The melting of ice also contributes to the next major consequence of ocean heating; rising sea levels. 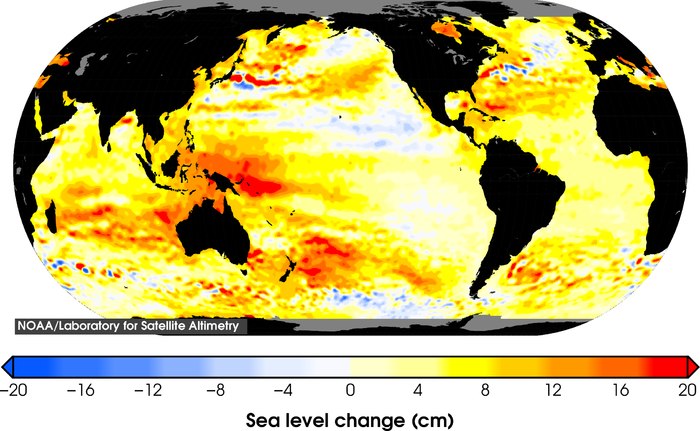 Figure 2. Sea level change since 1993. Global sea level change is anything but uniform, as some regions are more than 3x the global average. This is due to the variations in thermal structure of the top 1000 m of the ocean.[9]

The increase in sea level is concerning as 11 of the world's 15 largest cities lie on the coast, meaning that more people are at risk of harsh events like floods and hurricanes. Not only does it affect people's safety in these cities, but the damage such events can have is expected to cost a tremendous amount of money - in 2015 flooding in major coastal cities costs about $6 billion (USD) worldwide, and could increase to nearly $1 trillion by 2050.[8]