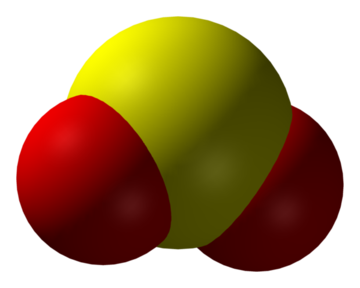 Figure 1. A sulfur dioxide molecule, one compound that is considered a sulfur oxide.[1]

Sulfur oxides or SOx are a group of pollutants that contain both sulfur and oxygen molecules. Sulfur dioxide, SO2 is the most common form in the lower atmosphere. Sulfur dioxide is colourless, but has a distinct smell and taste that can be detected if the gas has a high enough concentration. Sulfur oxides dissolve readily in water, and result in the atmospheric formation of sulfurous acid or sulfuric acid - a component of acid rain.[2]

The majority of sulfur oxides are produced when fuels that contain sulfur undergo combustion. As well, the roasting of metal sulfide ores is a major source. Natural sources account for anywhere between 35-65% of total sulfur dioxide emissions specifically.[2] Natural sources include volcanoes. Coal burning power plants that burn high-sulfur coal are some of the main sources of SOx. Vehicles can also be a source of sulfur oxides.

There are several different ways to prevent SOx from entering the atmosphere, and steps can be taken before, during, and after combustion to prevent its escape. Before combustion, coal can be "washed" to remove mineral matter and clean the coal. This is done at the mouth of the mine by floating crushed coal down a stream of water, allowing the lighter coal particles float to the top while heavier materials sink down.[3] As well, coal can be gasefied into synthesis gas, eliminating the sulfur and producing a gas that can be used in a power plant. Finally, oil can be desulfurized in refineries in a catalytic process known as the Claus process, in which hydrogen gas is blown through the oil to remove the sulfur.[3]

During combustion, fluidized bed combustion can be used to remove sulfur. In this process, coal is crushed into small pieces and combined with a material such as limestone and blown over a grate in a cylinder. Then air is blown in beneath the grate, and the coal-limestone mixture burns while floating above the grate. The limestone acts as a sorbent and extracts the sulfur and other impurities from the coal.[3]

After combustion, a wet scrubber can be used to treat flue gas with an aqueous mixture that removes the sulfur oxide from the gas before it is released into the atmosphere.[3] Dry scrubbers can also be used, the only difference is that a dry powder is used to absorb the sulfur.

Emissions of SOx can have negative impacts on vegetation of all kinds, including agricultural crops. Plants exposed to high levels of sulfur dioxide lose leaves, have a lower yield, or even die prematurely.[2] This is especially true for plants that are close to the site of these emissions. Additionally, sulfate aerosols - another component of SOx converted from sulfur dioxide in the atmosphere - can reduce visibility, contributing to haziness and smog. In addition to the gas itself, if trees or other plants are exposed to wet or dry acid depositions from the emission source, they can also be harmed. Agricultural crops, as well as freshwater lake and stream ecosystems are harmed by this deposition as it lowers the pH of water - this results in acidification.[2]

Exposure to sulfur oxides can be harmful to human health. Since sulfur oxides are irritants, they have been associated with reduced lung function, increased incidence of respiratory diseases, irritation of the eyes, nose, and throat, and even death.[2] Children, the elderly, and asthmatics are especially at risk because of their reduced lung functions. Acute exposures to higher concentrations are linked highly to negative health effects, but over time exposure to smaller amounts is just as harmful.

As well, since sulfur oxides are a component of acid rain, the emissions of sulfur oxide can affect building stone and other materials. Sulfurous acid is formed when sulfur dioxide reacts with moisture, and this acid accelerates the rusting process of a variety of metals. As well, acidic gases formed by SOx emissions can erode marble and limestone.[2]

The following data visualizations show the sources emitting SOx in Canada. For a more in-depth look at pollution data, including a graph showing how SOx emissions have changed over time, click here.