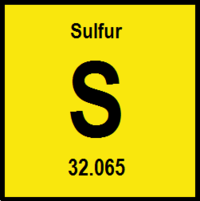 Sulfur (S) is the 16th element on the periodic table. Sulfur is the tenth most abundant element in the universe, and it is fairly common on Earth as well. It is a pale yellow, odourless, and brittle material that has been known since ancient times.[2] 25% of today's produced sulfur is recovered from the petroleum refining process or the process of extracting materials from ores containing sulfur. Most sulfur is produced from underground deposits.[2]

Sulfur is used in a variety of ways in both gaseous and solid compounds, however sulfur is also a major component of the group of pollutants known collectively as sulfur oxides or SOx.

Some properties of sulfur include:[2]

Sulfur is commonly used to create sulfuric acid, which is used in a number of different industries. Specifically, sulfuric acid is used to make fertilizers and lead-acid batteries.[2] As well, sulfur is used in the production or inorganic chemicals, matches, explosives, cement, and glass.[3]

Along with sulfuric acid, sulfur forms compounds such as hydrogen sulfide and sulfur dioxide. Sulfur dioxide is used as a bleaching agent, solvent, disinfectant, and refrigerant. However, when combined with water it forms sulfurous acid, which is a major component of acid rain.[2]

Sulfur dioxide, SO2 is the most common sulfur oxide in the lower atmosphere. It is colourless, but has a distinct smell and taste that can be detected if the gas has a high enough concentration. Sulfur oxides dissolve readily in water, and result in the atmospheric formation of sulfurous acid or sulfuric acid - a component of acid rain.[4]

Most sulfur oxides are produced when fuels that contain sulfur undergo combustion. Coal burning power plants that burn high-sulfur coal are some of the main sources of SOx. Vehicles can also be a source of sulfur oxides.[4] Exposure to these oxides can be harmful to human health since they are irritants. Side effects of exposure include reduced lung function, increased incidence of respiratory diseases, irritation of the eyes, nose, and throat, and even death.[4]

Natural gas with especially high levels of hydrogen sulfide is referred to as sour gas. Some of this sulfur can be removed through a "sweetening" process, which is done mainly using amine solutions that remove this hydrogen sulfide. The process used is known as the "amine process" or more commonly the "Girdler process", and it is used in most gas sweetening operations.[6]

The video below is from the University of Nottingham's periodic videos project.[7] They have created a complete suite of short videos on every element on the periodic table of elements.