Tight gas is natural gas trapped within a rock with extremely low permeability—typically limestone or sandstone. This is not to be confused with shale gas, which is natural gas trapped within shale formations.[1] Tight gas is considered to be an unconventional source of natural gas because it requires significant hydraulic fracturing—a much more extensive process—to access the gas. This is because the low permeability of the rock (meaning the pores within the stone are poorly connected), makes it difficult for the gas to travel through them.[2] 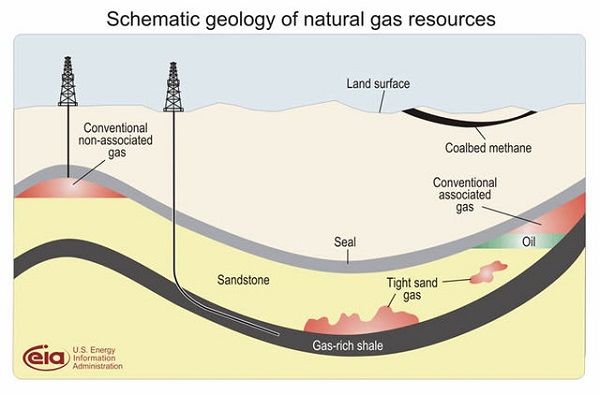 Tight gas is formed in the same general way as conventional natural gas deposits, the main difference being the age of the deposits. Conventional gas is relatively young whereas tight gas formed around 248 million years ago in Palaeozoic formations. Over this long period of time, a conventional gas reserve was changed by cementation and recrystallization. This led to reduced permeability of the rock and natural gas being trapped tightly within rock formations.[4] Most tight gas formations are found onshore.[4]

Unlike a conventional natural gas formation, it is not easy to access the gas held within a tight gas formation. Without some sort of assistance, gas would flow into the well at an extremely slow rate, making production of natural gas uneconomical. Generally with these wells, vertical drilling is not an option. Horizontal or directional drilling are used to access tight gas deposits as they can run along the formation, allowing more opportunities for the natural gas to enter the well.[4] In addition, numerous wells can be drilled into a tight gas deposit so that more of the formation is accessed.

Once a well is drilled down to a tight gas deposit, artificial stimulation can be used to promote the flow of tight gas from the rock.[4] Hydraulic fracturing is one main method used to access the gas, and this method involves breaking apart the rocks in the formation by pumping the well full of high pressure fracking fluids. This improves permeability and allows gas to flow more easily. Acidizing the well—or pumping the well full of acids to dissolve the limestone and sediment—allows the gas to flow more freely by establishing paths for the gas to follow.[4]

Finally, deliquifaction of the tight gas wells can help with extraction. In most tight gas formations the reservoirs also contain some water which can collect and make extraction difficult. Deliquefying by pumping water up from the reservoir makes removing the gas more simple.

The environmental concerns surrounding drilling for tight gas are similar to those that surround shale gas drilling. This is largely due to concerns involving the fracking process. First, drilling and fracturing these wells requires a large amount of water. In some areas, significant water use for shale gas could affect the availability of water for other uses or affect aquatic habitats. In addition, drilling and fracturing produces large amounts of waste water that may contain contaminants. This results in the water requiring treatment before disposal or reuse. How waste water should be treated and disposed is a complex issue. Additionally, hydraulic fracking fluid can be a contaminant if not managed properly as spills or leaks could occur. The chemicals in the fracking fluid can be dangerous, and any release of the fluid could result in contamination of groundwater for drinking or habitats for wildlife.[5]

Environmental concerns in regards to acidization are also prominent. The use of hydrofluoric acid to release tight gas in these reserves is potentially an issue simply because the substance is so dangerous. A spill or a leak could harm workers and pollute groundwater for residential uses.[6]

Finally, the ability to drill into these reserves directionally or horizontally leads to concerns about drilling companies having access to potentially environmentally significant areas. By making access easier, more and more previously unreachable sources in previously preserved areas could be disturbed.