Horizontal wells are an alternative method for drilling for oil and natural gas when vertical wells do not yield enough fuel or are not possible. Drilling at some non-vertical angle can hit targets and stimulate reservoirs in ways that a vertical well cannot.[1] Combined with hydraulic fracturing previously unproductive rocks can be used as sources for natural gas. Examples of these types of deposits include formations that contain shale gas or tight gas.[2]

The advancement of horizontal drilling has been most important in developing the ability to obtain natural gas from shale. Extremely low permeability shale can contain significant amounts of natural gas and there are many shale plays all over North America that could be tapped into. Some major plays include the Barnett Shale of Texas, the Fayetteville Shale of Arkansas, the Haynesville Shale of Louisiana and Texas and the Marcellus Shale of the Appalachian Basin.[1] For these deposits, finding the reservoir is much more simple than obtaining the gas. However, being able to obtain the gas unlocks a major new source of fossil fuels. 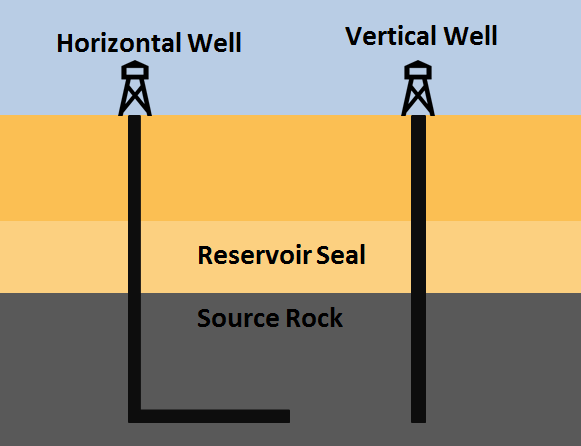 Figure 1. The shape of a horizontal well compared to a traditional vertical well.[3][4]

Most horizontal wells are started by drilling a vertical well. After drilling down to the target rock, the pipe is pulled out of the well and a motor is attached to the drill bit. The motor is fuelled by a flow of drilling mud down the drill pipe, rotating the bit without rotating the entire pipe.[5] This allows the drill bit to create a path that is different from the orientation of the drill pipe.[1] In a horizontal well, the bit and pipe are lowered down into the well and the bit drills a path that curves from vertical to horizontal. Once the proper angle is achieved, drilling resumes in a fully horizontal direction.

Although useful, horizontal drilling is as much as three times more expensive than vertical drilling. However, the extra cost is generally made up for with the increased well production, vastly increasing the yield of oil and gas from a well.[1]

Even though horizontal drilling is more expensive, there are numerous reasons as to why they are drilled. Vertical wells are able to drain rocks that have a high permeability, however low permeability rocks do not let fluids flow quickly and thus using a vertical well for these rocks would not be economically viable. Some reasons for drilling horizontal wells include:[1]

With the advancements of horizontal and directional drilling equipment, various wells can be drilled at a number of angles from a single location. This allows reserves far away and at great depths to be tapped into more easily.[6]

The main environmental concerns with the use of horizontal drilling are related to water and the access that drilling horizontally allows. First, the ability to drill in areas that were previously too difficult to access may result in potentially environmentally significant areas being disturbed as they can be drilled in for the first time. As well, issues with water extraction and contamination exist. While traditional drilling uses around 300 000 liters (or about 80,000 gallons) of water per fracturing operation, horizontal drilling uses higher intensity fracking, using up to 11 300 000 liters (about 3,000,000 gallons) per fracturing operation and multiple fracks per well.[7] The use of this much water is concerning as it could reduce access to water for people. As well, the hydraulic fracturing utilized in most horizontal wells poses a water contamination risk as a result of the chemicals used in the fracturing fluid.[7]

On the plus side, horizontal welling has reduced the surface footprint of oil extraction considerably, since much more of the hydrocarbon resource can be extracted from one site.