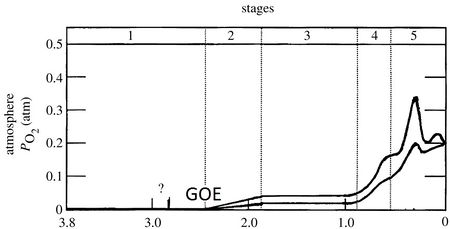 Figure 1. The partial pressure of oxygen in the atmosphere vs. billions of years in the past. Measuring oxygen levels billions of years ago is tricky, so the graph gives a range of predicted values. The top curve represents the level of the highest guess at a given time while the lower curve represents the best guess of the lower limit of oxygen in the atmosphere.[1] The boundary between region one and region two is the great oxygenation event (GOE).

Figure 2. The makeup of the Earth's atmosphere as a function of time.[2]

Figures 1 and 2 show the progression of O2 over earth's geologic history. While possibly not at the peak experienced 10's of millions of years ago, the level of atmospheric oxygen levels (~21%) are high enough to allow Earth's ecological systems (and humans) to flourish.[1] Significant levels of O2 are, cosmically, really quite rare![3] Oxygen will chemically react with almost anything, so having such a large amount of oxygen available in the atmosphere means that it must be continuously produced. The oxygen is produced by photosynthesis, but if that were to ever stop chemical reactions would make it all go away quite rapidly. If the chemical signature of molecular oxygen were found on another planet it would be a sure sign of life, since molecular oxygen wouldn't exist without life creating it.

In Earth's ancient past, photosynthesis developed billions of years ago, which released O2. This oxygen didn't stick around as O2, but immediately reacted with rocks, effectively 'rusting the planet'. This rusting allowed many of the oxides in minerals to form, but after a certain point (roughly 1 billion years), the rusting stopped because the chemical reactions had all taken place. This allowed the 'great oxygen event' (GOE) to take place, see the line between region 1 and 2 in figure 1. This permitted the oxygen levels in the atmosphere to grow to significant levels. This process completely transformed the Earth and is probably the most significant impact that life has had on the environment. See figure 2 for how gases that make up the Earth's atmosphere have changed with time.

Today, atmospheric oxygen is essential for higher forms of life (living organisms with many cells) to exist. Additionally, fossil fuels can undergo combustion because of atmospheric oxygen. The carbon in the fossil fuel, like coal, reacts with the oxygen in the atmosphere to form carbon dioxide. The oxygen in the atmosphere is 'free' for anyone to use. The lack of abundant O2 under water is what makes submarines hard to power (can't burn fossil fuels without O2), and lack of O2 in space requires space missions to use other primary energy sources like radioisotope thermal generators or solar power.

For more information on the history of oxygen please see Donald Canfield's: "Oxygen: a four billion year history".[3] For a scientific paper on the subject please see: "The oxygenation of the atmosphere and oceans" by Heinrich Holland.[1]