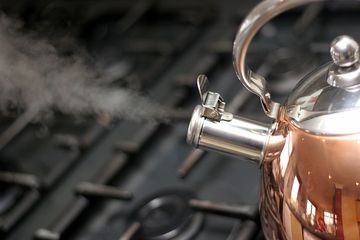 Figure 1. Although invisible, water vapour is one component of the wet steam released by a boiling kettle, the visible portion is microscopic droplets of water suspended in the air.[1]

Water vapour is water in gaseous instead of liquid form. It can be formed either through a process of evaporation or sublimation. Unlike clouds, fog, or mist which are simply suspended particles of liquid water in the air, water vapour itself cannot be seen because it is in gaseous form.[2]

Water vapour in the atmosphere is often below its boiling point. When water is boiled the water evaporates much faster and makes steam. Steam often has droplets of water, which is what is seen water is boiling. Since both water droplets and water vapour are present, this is called wet steam (also called wet vapour). As the mixture gets hotter, the water droplets go away and it becomes dry steam (also called dry vapour).[3] Power plants use water vapour in the form of steam (dry is better, but wet is used too) as a working fluid to turn their turbines to make electricity.

Even on a clear day, water vapour exists in the atmosphere as an invisible gas - unlike clouds which are droplets of liquid water that can be seen. If the conditions are right, water vapour in the air can collect on small particles of dust, salt, or smoke in the air to form small droplets. These droplets gradually increase in size and over time become various forms of precipitation. Since water vapour is so prominent in the atmosphere and forms precipitation, water vapour is a major component of the hydrologic cycle. When water holding areas are heated by the Sun, some of the water being held evaporates and becomes vapour, powering the cycle.[5]

In addition to being created by evaporating water, plants are capable of producing water vapour through a process of transpiration.

Figure 2. Methane combining with 2 oxygen to form carbon dioxide, two water molecules (in the form of water vapour) and heat.[6]

Since water vapour is released when hydrocarbons are burned, water vapour is a fairly large component of the flue gases released from coal fired power plants or natural gas power plants. A surprisingly large amount of water is released when coal is burned. For example, when burning bituminous coal roughly 0.4 kilograms of water are produced for every kilogram of coal burned. This means that tonnes of water are be produced per hour at a large-scale coal fired power plant.

Water vapour moves across the Earth's surface, cycling through a variety of storage areas. It is this cycling that shapes the climate of different regions across the globe, providing precipitation and supporting life. As the climate changes, the distribution and cycling of water vapour changes as well.[7]

Water vapour is actually the most abundant greenhouse gas in the atmosphere, and the most potent of all the greenhouse gases as a result of its chemical structure. Its presence accounts for around two thirds of the natural greenhouse effect.[2] In the past there has been debate over how severe an impact water vapour has on global warming, but recently studies have confirmed that the amplification that water vapour has on heat is strong enough to double climate warming caused by increased CO2 levels.[8]