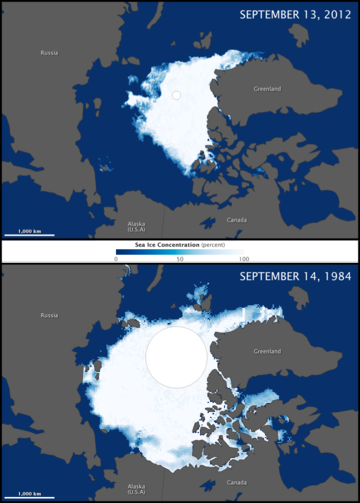 Figure 1. A map showing the decrease in arctic sea ice over the years. The melting of ice and corresponding change in albedo is one major positive feedback.[1]

Similar to how keeping money in a savings account earns interest and compounds to earn more money, positive climate feedback increases some initial change in the climate. Some initial warming is accompanied by additional warming from some other process, which in turn results in even more warming. For further explanation on what a positive feedback is in general, click here.

There are disconcerting positive feedback cycles being observed and predicted.[4] It is important to note that these different types of positive feedback result in a different amount of warming overall. The following are a few of the climate endangering cycles.

One example of a positive feedback is the melting of ice - particularly sea ice - and corresponding decrease in albedo (see Figure 1). Ice is white and highly reflective - corresponding to a high albedo. This reflectivity prevents some incident sunlight from being absorbed.[2] However, when ice melts the vegetation, soil, or water beneath it is exposed. These surfaces are darker and heat faster and thus have a lower albedo. As these surfaces with a lower albedo are exposed to the Sun, they absorb more solar radiation than the ice would have. This absorption further raises temperatures and causes even more ice to melt, continuously heating and pushing the cycle. This feedback can act more quickly over the ocean than over land as sea ice is able to melt more quickly than large, continental ice sheets.[4]

As the temperature on the Earth increases, permafrost begins to thaw. This permafrost contains large amounts of carbon that was contained in frozen soil. Thus the melting of the permafrost releases methane into the atmosphere. As these greenhouse gases are released they cause more warming, which in turn causes more thawing and more carbon release.[4]