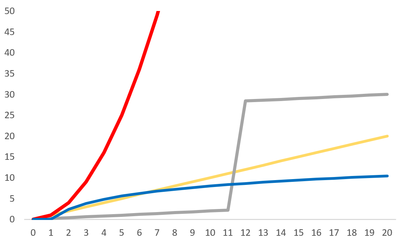 One of the biggest concerns about climate change is that some responses to increased greenhouse gases will be linear for a while, but will then have a sudden jump. These sudden jumps are often irreversible. This kind of relationship is shown with the grey line in Figure 1. Other relationships shown here are power relationships - shown in red - which is more than linear, as well as logarithmic in blue. This relationship shows a potential situation wherein more greenhouse gases being added to the atmosphere has comparatively less impact than a strictly linear relationship.