Water storage refers to holding water in a contained area for a period of time. Water storage can be natural or artificial. Natural water storage occurs in all parts of the hydrologic cycle in which water is stored in the atmosphere, on the surface of the Earth, and below ground. Artificial water storage is done for a variety of reasons and is done on small and large scales. Water storage locations are commonly referred to as reservoirs.[1]

Each stage of the hydrologic cycle involves the storage of water (Figure 1). Water can be stored in the atmosphere, on the surface of the Earth, or underground.[2] These water storage areas are most commonly known as reservoirs. Natural reservoirs include oceans, glaciers and ice sheets, groundwater, lakes, soil moisture, wetlands, living organisms, the atmosphere, and rivers.[1] 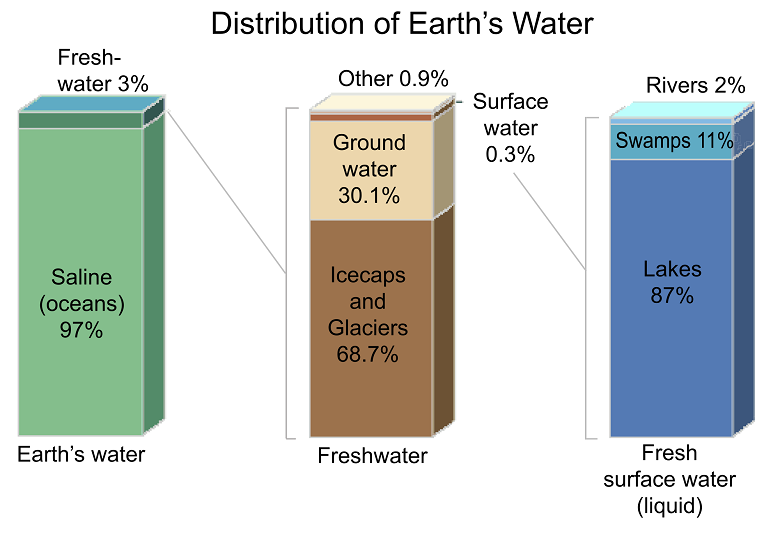 Water moves from reservoir to reservoir through different hydrologic fluxes such as evaporation, condensation, the flow of rivers, precipitation, and anthropogenic diversion. Oceans, rivers, ice caps, the atmosphere, aquifers, and lakes are all examples of reservoirs with varying residence times. The residence time describes how long the water stays in a reservoir before leaving. Water in the atmosphere stays there for an average of 15 days, while soil moisture lasts a couple of months. Lakes replenish their water every 50 to 100 years, and groundwater can reside in the reservoir for 100 to 10 000 years. Ice caps have the longest residence times, with residence times of up to 400 000 years recorded in an ice core from Vostok, Antarctica[4]. Water below ground may be stored in the unconsolidated sediments near the surface or can be stored in porous rocks such as limestone and sandstone. Rocks that can easily store water below ground surface are known as aquifers.

Artificial water reservoirs range in size from rain barrels and household water tanks to urban infrastructure and industrial reservoirs. Some of the smaller types of artificial storage include water towers, tanks, and rain barrels for use by people in times of drought or in areas that do not have easy access to water sources. Commercial uses for artificial water storage tend to be larger in scale, such as holding ponds and dam reservoirs. Some examples of industries that use water storage include mining, agriculture (for irrigation and livestock), and energy generation.[5]

An important use of artificial water storage is in hydroelectricity. A reservoir of water is built up behind a hydroelectric dam. The water in the reservoir is at a higher elevation than the water on the other side of the dam and a penstock is used to convert the potential energy of the water into mechanical energy. The flowing water is used to push turbine blades and produce electricity. The height that the water sits at behind the dam is known as the hydraulic head, and is one of the major factors in determining how much electricity can be generated. [6]