An aquifer is a porous, water-saturated layer of sand, gravel, or bedrock, which contains groundwater or has flowing groundwater. Simply put, aquifers are large, underground stores of water. They are accessible by a well, and provide the world with around 1/4 of its drinking water.[1] The upper level of the underground water is called the water table.[2] The world's largest known aquifer is the Great Artesian Basin, in Australia, at more than 1.7 million square kilometers.[3]

Aquifers are sorted into unconfined and confined aquifers:[1]

Rocks that encompass freshwater have been discovered at depths of more than 1829 m and salty water has come from oil wells at depths of more than 9144 m.[2] However, on average the porosity and permeability of rocks decrease as their depth below land surface increases. This is because the pores and cracks in rocks which are at high depths are closed or greatly reduced in size because of the weight of rocks above.[2] Fractured volcanic rocks such as columnar basalts also make good aquifers.[4] Rocks such as granite and schist are generally poor aquifers because they have a very low porosity.[4]

Aquifers are replenished naturally by precipitation, which is known as groundwater recharge. However, the rate of recharge is not the same for all aquifers; this is important to note when pumping water from a well. Pumping too much water at a fast rate decreases the water levels in the aquifer and eventually causes a well to return less and less water and can even run dry. Some aquifers can be recharged laterally by exchanging water with stream run off. Groundwater recharge occurs extremely slowly, with rates of groundwater recharge commonly less than about 1 meter or so per year and they can be less than 0.1 meters a year in arid regions.[1] If the extraction of groundwater is done slower than it naturally replenishes, then the aquifer can be a renewable source of water. 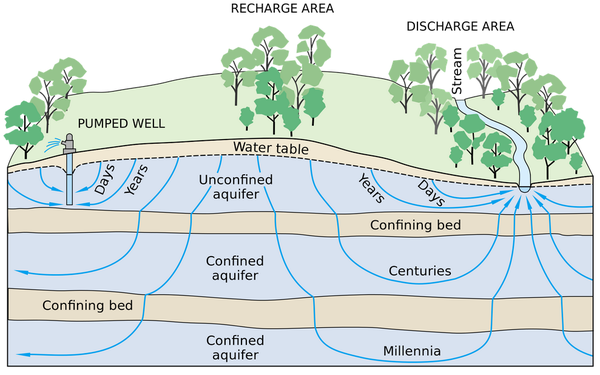 Figure 1. A diagram portraying the layout of an aquifer and distinguishing between "confined" and "unconfined".[5]

There are many concerns with water use from aquifers and how it may affect local geography and ecosystems. Water is often drawn faster from aquifers than they naturally replenish, especially in agriculture intense countries like China, India and the United States, which results in a depletion of groundwater resources. Withdrawal rates have increased rapidly in the past century, with global water withdrawal increasing sevenfold and per capita water withdrawal being quadrupled.[1]

The over-exploitation of water also results in falling groundwater levels, meaning that one needs to go deeper to find an aquifer.[6] Groundwater level declines are often difficult to see happening so it is generally too late to act until damage is already done. The first sign of this is typically dry wells, followed by a loss of water in deeper wells. This has an effect on rural populations who rely on the use of aquifers for their water supply, and indirectly increases the gap between the rich and poor in some areas.[1] In other cases, such as iron staining, health impacts due to high concentrations of dissolved iron are not a problem as much as the aesthetic quality of the drinking water supply. In other cases, where elements such as fluoride, uranium, or arsenic occur naturally in high concentrations, human health may be affected.[7]