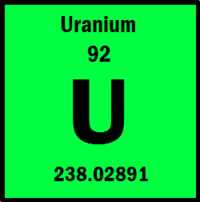 Uranium is the 92nd element on the periodic table, and is the heaviest naturally occurring element on Earth.[2] It is known for being an abundant source of concentrated energy,[3] with the largest energy density of any of the world's fuels used for the generation of electricity.

Uranium is found relatively commonly on the Earth, with an abundance of 2.8 parts per million in the crust.[4] This makes it more common than gold, as common as tin, and less common than copper. 99.3% of the uranium found on Earth is Uranium-238 which is "fertile", while the rest (0.7%) is Uranium-235, a "fissile" fuel. Therefore only a very small amount of the uranium found naturally can be used in a nuclear fission process unless it undergoes an enrichment process, which increases the concentration of Uranium-235, or the Uranium-238 is "bred" from its fertile form into a fissile isotope of plutonium. Read more about breeding here.

Uranium as a fuel

Uranium makes for an excellent nuclear fuel, and is used as the primary fuel in nuclear reactors all over the world. In this section, uranium's fuel cycle will be briefly explored. Visit the pages above for more information. 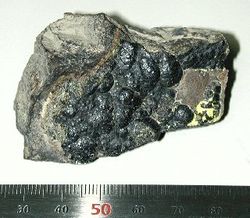 Figure 3. Fuel rod bundle of the CANDU uranium fuel with Jason Donev for scale.[6] This bundle, if full and in a CANDU reactor would provide all of the electricity needs a family of 4 in Canada for 100 years.

Uranium can be harvested from the Earth by uranium mining, however the practicality of its harvesting depends on many factors. Available technology and total cost must be considered when developing a mining project, and the grade of the ore must also make the project cost-effective.[4] Once the ore has been mined (Figure 2), it undergoes processing in which the uranium is turned into a desirable form. Some nuclear reactors, such as the CANDU, can use uranium in its natural composition. However most reactors require the uranium to be enriched, which means that the concentration of Uranium-235 is increased from 0.7% to about 5%.[3]

Enrichment of uranium allows power plants to use light water (ordinary water) as its coolant and moderator, since the enrichment increases the number of nuclear reactions in the reactor. After enrichment, the uranium is formed into small fuel pellets, and loaded into a fuel rod. These are assembled into fuel bundles, as seen in Figure 2. These fuel bundles are placed directly into a reactor's core, ready for fission.

Use and Generation of Electricity

Once the uranium is assembled, it can be used in a reactor to produce heat. A common misconception is that nuclear power plants magically convert their fuel directly into electricity, however their operation once the heat is generated is nearly identical to an ordinary coal-fired power plant. Depending on the type of reactor, the heat is transferred to circulating water which boils to steam either directly (i.e. the RBMK reactor) or indirectly (i.e. pressurized water reactor). This pressurized steam can then be used to spin a large turbine and generator, supplying electricity for the world's needs.

As mentioned, the isotope Uranium-235 is fissile. This means that it undergoes nuclear fission upon absorption of a neutron, which gives off lots of energy in the form of heat. However, Uranium-235 isn't the only isotope that can provide heat in a reactor. By the process of transmutation, Uranium-238 can be converted to Plutonium-239 through a series of beta decays. Plutonium-239 is fissile just like Uranium-235, and the fissioning of it supplies additional power. For a light water reactor like a BWR or a PWR, it's around 1/3 of the power, and around 1/2 of a CANDU reactor's energy.[3]

Figure 4. A boiling water nuclear reactor, which operates by use of uranium fuel.[7]

Uranium in other uses

Uranium has many other uses outside of its primary use in the generation of electricity. It has provided the world with many positive innovations in the medical and industrial sectors, and also has been negatively scrutinized for its use in and production of weapons products.

Radioisotopes derived from the decay of uranium isotopes are used widely throughout the world.

In medicine they are used for diagnosis and research, with about 1 in 2 people in the Western world likely to experience the benefits of nuclear medicine in their lifetime.[3]

Radioisotopes are also used for the food industry, as they can preserve food, kill parasites, and control the ripening of fruits and vegetables.[3]

Industrially they are used for safety as they can detect leaks, provide analysis of minerals and fuels, and uranium can work as a radiation shield.[8] The radioactive element Americium is used in smoke detectors as well. 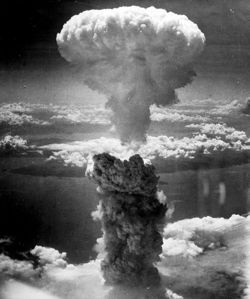 Figure 5. The cloud produced by the explosion over Nagasaki.[9]

The energy from uranium, along with its by-product of plutonium, have a history for producing disastrous consequences. The earliest nuclear bombs were developed during World War II in secrecy, by the United States in what was termed the Manhattan Project.[10]

The key difference between nuclear weapons and fuel used in reactors is the grade of the fuel. Mentioned earlier is that the enrichment of the Uranium-235 must be around 5% for many reactors, which in itself is a complicated task. For bombs, this enrichment must be around 90%.[11] This fact has helped control the proliferation of nuclear weapons, as it makes it difficult for an ordinary group of people to develop such a high grade of uranium.

The first nuclear bomb ever detonated in combat was called the "Little Boy", developed during the Manhattan Project and detonated over Hiroshima. It used two pieces of sub-critical Uranium-235, which upon detonation smashed into each other, producing an uncontrollable nuclear chain reaction and yielding an energy release equal to 13 000 short tons of TNT.[10] The second, and final bomb ever detonated in combat was called the "Fat Man" which made use of highly enriched plutonium, yielding a release of energy equal to 20 000 tons of TNT.[10]

The use of these bombs has been extremely controversial since their detonation, as they killed hundreds of thousands of people. This destructive use of nuclear power has probably affected how people have viewed the rare few nuclear disasters in Chernobyl, Fukushima, and Three Mile Island. Overall, this has left a very negative view of nuclear energy in a large portion of the general population.

The video below is from the University of Nottingham's periodic videos project.[12] They have created a complete suite of short videos on every element on the periodic table of elements.