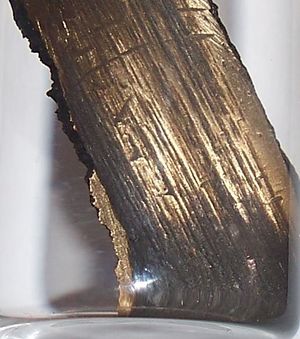 Fertile is a term used to describe an isotope that is not itself fissile (it cannot simply undergo fission by thermal neutrons), but can be converted into a fissile material through irradiation in a nuclear reactor. After this, the fission of this isotope could undergo radioactive decay.[2] Uranium-238 and thorium-232 are known as fertile materials, and the production of fissile materials from them after capturing a neutron is known as breeding.[3] When these fertile materials capture neutrons, they are converted into fissile plutonium-239 and uranium-233, respectively.[4]

Generally, larger nuclei with even atomic masses (such as thorium-232, plutonium-238, and uranium-238) are fertile materials. When the nuclei absorb a neutron, it induces an odd atomic mass—making it a fissile material.[5] Generally, this absorption results in an energetically unstable product and thus this product undergoes a radioactive decay fairly quickly until it reaches a fissile product that can be used as a nuclear fuel.[5]

There is a special type of reactor that makes use of fertile isotopes to create nuclear fuel. These reactors are known as breeder reactors as they irradiate a fertile isotope inside of the reactor, causing the isotope to absorb a neutron and decay to a fissile isotope. In these reactors, fissile plutonium-239 is generally created by bombarding uranium-238 with neutrons. These reactors create fissile material more quickly than they could use a different fissile material (such as uranium-235) as fuel.[6]